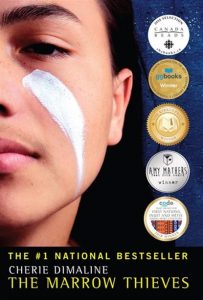 The world lies in broken chaos. Global warming has destroyed the climate, redrawn coastlines, erased borders between nations and sent refugees fleeing everywhere. In The Marrow Thieves by Cherie Dimaline, these are not even the worst problems her characters face.

Frenchie is one of the indigenous peoples of North America. He is fleeing with other native people from the majority population, a population who seeks them for a terrible reason. In this damaged world, only people of indigenous descent are still able to dream. Most people can no longer dream at night. Their rest is lacking because their minds will not enter the needed REM stage…that is, unless they are treated with a drug synthesized from the marrow of Native peoples. So Frenchie is fleeing north with a small group of others, fleeing for their lives from people who would literally harvest the marrow from their bones.

The Marrow Thieves takes readers and characters on a harrowing journey to a no longer frozen Arctic. Set in an unrecognizable Canada, the characters face threats from people who would turn them in for a reward, from the perils of any journey through the wilderness, and from the scars of their own wounds which they carry along with them. None of the characters has arrived unscathed. All suffered loss and tragedy as family and friends were captured and taken to the “schools”…schools from which no one ever returned. And this small group of travelers does not remain whole, either, as not everyone survives their trek.

This is not a depressing book, though. This ragtag band of travelers becomes a family, finding love and acceptance that may not replace what was lost, but does help them carry their burdens. Led by their own Moses, they travel through the wilderness seeking a refuge. They may never quite find a promised land, but in some ways they find more than they ever thought possible.

It would be nice to think that in a dangerous world people would be more supportive of each other, compelled by common need and common humanity to care for others. Of course, I am writing this on Christmas Day, and it would also be nice to think that Santa Claus traverses the world in a single day carried by flying reindeer. Sadly, neither Santa nor human compassion for refugees can actually be tracked by radar.

Still, in the midst of a world seeking their lives, Dimaline’s characters find compassion and love with each other. And perhaps it is only in the families we have and those we make for ourselves that the truest sense of compassion can flourish. Frenchie’s companions are old and young, male and female, straight and gay, but ultimately they are his brothers and sisters, father and mother, and this new family gives him the hope and strength to finish his journey.