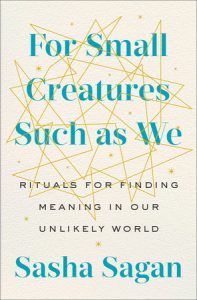 Nonfiction: For Small Creatures Such as We, Sasha Sagan

Let’s get one thing out of the way immediately: yes, Sasha Sagan is the daughter of the famous Carl Sagan and Ann Druyan. That being said, this book is not a book about the cosmos or any of the other scientific interests of her parents. Rather, this is a book about finding meaning in our lives, through appreciation and ritual and each other.

Sagan is not religious. Nor is she anti-religion. She is a secular person, raised by secular people, who appreciates the good and valuable things of religion. She was also raised by a devout Catholic nanny, Maruja, with whom she occasionally attended church. Members of her extended family remained devout observant Jews. Though she does not embrace their faith, she embraces the way that their faith gives them meaning and appreciates the value it adds to their lives.

Cultures around the world engage in certain rituals to mark specific life events and transitions. Birth. Death. Marriage/Sex. Puberty. Adulthood. Winter. Harvest, etc. The fact that these traditions honor different deities in some ways makes them more significant: they are apparently universal, human, expressions of our commonality that transcend belief in any one specific god. Apparently every culture (with appropriate caveats surrounding the word “every”) acknowledges the importance of the sun and the moon, with many people making their passages through the sky central pieces of their creation stories. Recognizing that these celestial objects have unparalleled influence over our lives is hardly specific to any religion, or even to being religious. Rather, it is simply an awareness of reality.

Sagan holds life as being profound and meaningful, and uses rituals within her family to help remind them and herself of its meaning. She encourages people to find their own rituals, either embracing or adapting those of their faith or starting new ones using the broad templates of time’s passage and life’s transitions to guide those celebrations. Her secular family lights a menorah…and puts up a Christmas tree. Neither is expressing a religious faith for her family…indeed, Christmas trees owe much more to pre-Christian spiritism than to the gospels. But both the menorah and the tree give her family connection and reflection, the opportunity to make memories and to share stories.

Humans are story people. Every (that word again) culture uses story to give context and meaning to their world, to their culture, and to their lives. In a global world where cultures meld together and traditions lose their authority, finding meaning can be a difficult process. For Small Creatures Such as We is a beautiful book that offers some guidance in finding meaning in life, creating memories in new and old traditions and telling stories to each other and to future generations.