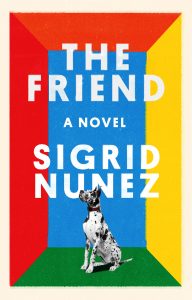 Written in the first person, the author reveals she is dealing with the death by suicide of an unnamed friend. This friend, a fellow writer and former teacher (and lover) of hers, had been part of her life for decades. She was a friend of his first wife, hated by his second wife, and acquainted with but not close to his third wife. Throughout, though, they were friends. Before he died, her friend had adopted a Great Dane. He mentioned to his wife (the current one, #3) that the author loved animals and lived alone. Somehow that translated into the dog becoming hers after his suicide.

This becomes awkward, as her apartment building does not permit dogs.

Still, the dog comes. And the relationship between the author and the dog becomes quite involved, as the dog becomes in some ways a substitute for her lost friend. The dog is clearly grieving the loss as well. The author succeeds in having him certified as an emotional support animal, although a friend of hers says the truth is more that she is an emotional support human for the dog.

But the plot is truly not the heart of this novel. The novel is essentially a one-sided conversation between the author and her dead friend. One sided, as the friend is no longer holding up his part of the conversation. We learn about their relationship. How they began as student-teacher. How they were briefly lovers. How he ended up marrying her friend. How his infidelities ended that marriage. We learn about his teaching, her teaching, their writing. Their thoughts about teaching, their thoughts about writing, their thoughts about teaching writing. She talks to her (absent) friend about life, about Apollo (the dog), about his wives and his lovers and her own lovers. It truly is a creative elegy about living a creative life, the costs and joys, grounded by the presence of an unwanted and unwelcome dog who becomes indispensable to her at the same time it nears the end of its natural life.

Without giving any of the characters names, with the exception of Apollo, Nunez makes them almost more familiar through their anonymity. Is the author writing about herself, or is this totally a fictional narrator? Is the “friend” an actual person, or completely made up? The author drops hints about “fictional non-fiction” and includes a chapter where she is no longer having a one-sided conversation but an actual conversation with a friend who attempted suicide but was found and hospitalized, where she tells him that she wrote about him and his dog–except the dog was a dachshund named Jip and not a Great Dane named Apollo. Or are these hints simply misdirections and there is no real “I” and no real “friend” and this is not a fictional nonfiction but just a novel?

Honestly, it really doesn’t matter. At the end, whether this is a fictionalized account of real people or a story made up from whole cloth, it is just very, very good. The contemplations on the writing life, on the nature of dogs, on sex between professors and students, on the changing mores of society, on love and friendship and loss, all are moving and intriguing and deep. Whether you like the characters or their beliefs or their actions or their choices, the book itself is profound. And Apollo is the quiet presence that grounds the book, connecting the narrator to the real world just as she becomes tempted to lose herself in her grief and her ruminations. This is a profoundly different book, but one that is well worth reading.