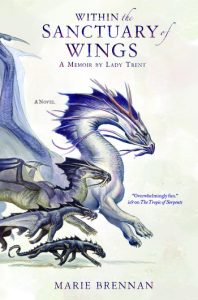 Fantasy: Within the Sanctuary of Wings, The Lady Trent Memoirs Book 5, Marie Brennan

Isabella Camherst, aka Lady Trent, has traveled from the mountains to the desert and across the ocean to study dragons. Her discoveries, along with her colleague and friend Tom Wilker, have changed the course of history, technology, and earned her a peerage among other recognitions. She has courted danger and scandal, but now married and enjoying the fruits of her accomplishments she seemingly has no more discoveries to make.

Until a man shows up with evidence of a previously unknown dragon species in the frozen heights of the world’s highest mountains.

The specimen is virtually inaccessible, frozen in the snow high above timberline. It would take a lot of money, cooperation from her government, an improbable journey near enemy lines, and no small amount of good luck to find it. One would be foolish to try.

Or, one would be so committed to discovery and the advance of knowledge that she could not help but make it happen.

If you have read my reviews of the previous books in this series, you know that I adore the protagonist. Lady Trent’s memoirs are written in a very self-deprecating style, one that acknowledges her own shortcomings and praises the work of her friends and colleagues. But they are also written with an edge, that of a woman trying to make her way in a man’s world. She is resentful that her contributions have not given her a membership into the exclusively male scientific community, she is still trying to prove herself despite decades of achievement and publication, and she is fighting to show that women are every bit as intelligent and capable as their male colleagues. She is aided in this fight by her husband Suhail and by her colleague Tom Wilker, but they are allies in a fight that is predominantly hers.

It would be nice to say that this is a fantasy world, one with Victorian values, one that does not reflect our own reality. However, I am writing this review at the same time as the first ever spacewalk by two women is going on–a spacewalk that was delayed for months because they did not have two suits that would work for women on board the space station! On the plus side, the walk is happening…finally. But I am left wondering how such an obvious oversight could have occurred to begin with. We still live in a world where the accomplishments of women are overlooked and even dismissed. Author Marie Brennan may write within the context of a fantasy world, but her message should not be dismissed as a fantasy. Excluding women from STEM fields of discovery impoverishes science and humanity.

Within the Sanctuary of Wings is a wonderful conclusion to the Lady Trent memoirs. I am sorry to bid farewell to this character, but I have thoroughly enjoyed the opportunity to walk with her through five books. I look forward to seeing what Marie Brennan has next in store for her fans.