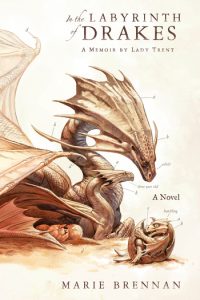 Lady Trent’s previous three memoirs have told the story of how she began studying dragons, her marriage to Jacob Camherst, and her trip to Eriga and her voyage on the Basilisk. This fourth memoir sees her going with her longtime colleague to the deserts of Akhia where she plans to study desert drakes.

This expedition is different, though. Unlike her previous expeditions which were intended primarily for the expansion of knowledge for its own sake, Isabella Camherst is on commission with the military to try to establish a breeding program for the dangerous creatures. A rival empire has discovered how to use dragon bones to create airships, and her military wants to secure a permanent and renewable source of dragon bones for their own use. Despite her reluctance to see dragons put to such a use, her passion for studying them demands that she accept the assignment and travel to Akhia.

Being Isabella Camherst, though, means that dangers and scandal travel with her. She is reunited with an old friend, Suhail, whom she met on the Basilisk and with whom she has been connected through rumor and innuendo despite the fact that she has behaved herself with propriety, as befits a lady. And the Yelangese Empire is not eager to see their Scirling rivals achieve a continuing source of dragon bone. Their efforts to end the project put Isabella into no little amount of danger.

Still, the resourceful woman and her friends and colleagues are up to facing danger. Whether they succeed in conquering the foes from without and the rumors from within, well, you’ll just have to read the book to find out for yourself!

Marie Brennan’s tone is light and conversational. It is easy to picture these books as actual memoirs from a Victorian-era female naturalist, one who is willing to buck the conventional roles and attitudes of her time and chart her own course. I have thoroughly enjoyed this series and am looking forward to reading its conclusion, soon.