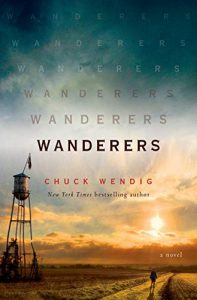 Shana wakes up one morning to discover her little sister, Nessie, is gone. A quick search finds Nessie walking away from their home, seemingly oblivious to everyone and everything. When Shana tries to stop her, Nessie’s body reacts by violently shaking and her temperature quickly rises to a dangerous level. Later we discover that if one of the walkers is stopped, their bodies literally explode.

Chuck Wendig has given us an epic novel about America. It may be shelved under science fiction, but the America he exposes is very contemporary with divides between races, between rich and poor, between educated and uneducated, between religious and nonreligious. Nessie and her fellow wanderers, along with the unaffected shepherds who accompany them, walk the country and unknowingly becoming the focal point of militants, of fanatics, of manipulators, and of the hopeful. The novel is a tour de force, peeling back the veneer of civility that masks some of the darker aspects of this country’s soul.

Wanderers raises a lot of questions. Are we as divided as we seem to be? Is there any hope for us? Would humanity be better if…well, I want to avoid spoilers. Let’s just say that the book gives an interesting take on these and many other questions.

Wendig populates his book with intriguing characters. A teenage girl who is fiercely protective of her sister. A disgraced former CDC doctor who may be the best hope of solving the mystery. A radio preacher whose world is shattered. An injured cop who sees the light. A washed-up musician who finds new purpose. These characters come together and interact, changing themselves and changing each other.

I have read reviews criticizing the author for being anti-Christian or anti-white or anti-Republican. I did not take this from the book, though in fairness my political and worldviews largely align with Chuck Wendig’s Twitter account so I may just not be bothered by the same things those other reviewers are. What I read was a book about people struggling with the greatest challenges we face: an intractable disease, broken families, divided loyalties, uncertain futures. Some succeed, some fail, some are redeemed, some are lost.

Wanderers is a brilliant book, with chapter after chapter building the tension as the walkers cross the country. At 780 pages it is not an easy afternoon read, but it is well worth the investment of time. I highly recommend it.