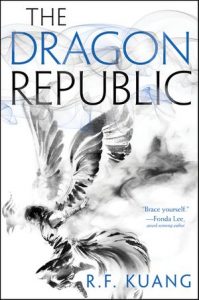 Rin has survived the war, and won it for the empire, but the cost to her personally was immense. She is wracked by guilt over her use of the Phoenix’s power and the huge loss of life that ensued. She is mourning the loss of Altan, her commander. She is burdened by the role of command of the Cike, the shaman division that she has been charged with leading. And she is consumed with the need for vengeance: to kill the empress. To deal with all of this and to quiet the Phoenix that insists she use his power again and again, she has become addicted to opium.

Clearly this is an inadequate coping strategy!

Rin is as much of a mess as any protagonist you might find in a fantasy novel. She has unimaginable power at her disposal, but using it is dangerous to everyone. The Phoenix, the god that supplies her power, is insatiable. It just wants to burn everything and everyone. It does not discriminate between friend and foe. It does not spare innocents and civilians. It just wants to burn. Rin cannot control the power without opium, but obviously drug addiction is not a long term solution.

A solution does present itself early in the book. Rin is approached by the Dragon Warlord, father of her old classmate Nezha, with a proposition. He wants her help to overthrow the empress and set up a democratically elected government, a republic. In exchange he can help her control her power without resorting to opium. It seems to be the ideal answer. That is, if the Dragon Warlord is what he seems to be…and if the empress is as bad as she seems to be. Those questions persist throughout the rest of the novel.

The Dragon Republic is a masterful sequel to The Poppy War, and this is an extraordinary series of fantasy novels. Set in a land reminiscent of China, Rin is a shaman in a world that distrusts magic, a southerner in a country ruled by northerners, dark skinned in a culture that favors light skin, and female in a male dominated society. Despite all of this, she fights for a seat at the table. Kuang does a marvelous job creating a character who is powerful and flawed, who is worthy of pity and admiration, who is held prisoner by her own weaknesses and is still able to draw upon her own strengths. Rin is a wonderful protagonist, and Kuang is a remarkable writer.

At over 650 pages, this is not a book most of us can knock out in an afternoon! Still, if you are looking for an epic fantasy set in a well constructed world with an amazing protagonist, this sequel is well worth the investment.

We also reviewed the first book in the series, The Poppy War. As much as we liked that one, the sequel might be a little better.