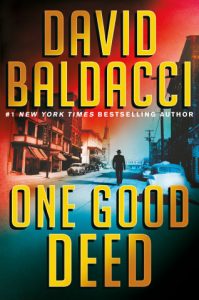 In 1949, Aloysius Archer was released from prison on parole after serving part of his sentence for a crime he did not commit. He arrives in Poca City with a list of rules, dos and don’ts, and the name of his parole officer. Among the don’ts: don’t go to bars, don’t associate with “loose women,” and don’t drink.

Of course, after being in jail, there is nothing he wants more than a stiff drink. So he goes to the local bar, where he meets a man who offers him a job. Collect a debt, or collect the collateral for the debt.

Archer soon discovers that collecting the debt will be difficult. The man who owes the money has a grudge against the lender, one that will not be easily resolved. The lender’s mistress also has a part to play, one that may violate several of Archer’s “don’ts.” And his parole officer is keeping close tabs on all her parolees, including Archer.

When a man is murdered down the hall from Archer’s room, suspicion falls on the ex-con. With no alibi and with clues pointing toward him, Archer finds himself racing to solve the crime before he is sent back to jail. But will he be able to do so with a detective, a parole officer, and a “loose” woman watching his every move?

David Baldacci has a gift for creating memorable characters. Archer is a straight talking WWII veteran who ended up on the wrong side of the law despite having committed no crime. He lives by his own code, which means he takes his list of “do’s” and “don’ts” more as suggestions than actual guidelines–although that could violate his parole and send him back to prison. The book’s characters feel authentic to 1949: the dialog, the attitudes toward women and minorities, the smoking and drinking all harken back to a different time. But the story is told in modern language, with a plot that is very “Baldaccian” in its scope and dimensions.

As the book progresses and the body count climbs, Archer has to use all of his ability and intelligence to stay one step ahead of the law and the killer or killers. Baldacci does a nice job hiding the final reveal until the very end. I don’t know whether he will return to Archer as a character in future books, but he does leave room for that possibility. I, for one, would be glad to see that happen. One Good Deed is one good novel.