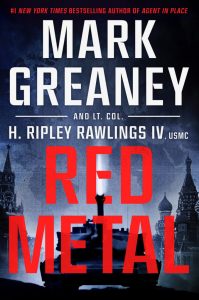 Fans of Tom Clancy already know Mark Greaney as one of the authors who has continued his characters in the ongoing Jack Ryan and Jack Ryan, Jr. series of books. Thriller fans will also know him from his “Gray Man” books featuring a former CIA agent who continues to work in the shadows. Now a new book, co-authored with retired USMC Lt. Col. Hunter Ripley Rawlings, IV, checks all the boxes for exciting, suspenseful, military thrillers.

Sweeping scope? Check. Lots of technical jargon (but not too much)? Check. Intractable enemy? Check. All seems lost until a few unlikely heroes step up? Check.

The plot summary is straightforward. A Russian colonel is embarrassed by having to abandon a mine in Africa that had been controlled by the Russians. The mine was rich in rare earth materials, REMs, which are used in high tech products like computers and cell phones. He comes up with a sweeping plot to reclaim this mine for Russia–or to destroy it so no one can use it. This plot includes a lightning strike in Europe aimed at the US Africa Command (based near Stuttgart, Germany), an aerial assault on GPS and satellite systems to disrupt communications across Europe, and an invasion of Africa to take back the mine itself. Taking advantage of US preoccupation with events in Taiwan and China, Russia believes it can catch the US and NATO sleeping.

What follows is over 600 pages of excitement, conflict, battles, heroes and villains. Greaney and Rawlings keep the action moving, from the offices of the Pentagon to the mountains of the Alps and from the cities of Poland to the savannahs and jungles of East Africa. Not every character survives to the end of the book, but every character gets a chance to prove his or her mettle, whether for Russia or for the US and NATO. It is said that true character is revealed in crisis, and there are enough crises in this book to let each character’s true self be revealed.

I like the way that the authors emphasize the power of individual actions to change the course of battle. A young woman’s heroic stand inspires a nation to fight. A tank commander’s decision to attack changes the war. An officer’s willingness to buck the chain of command in Washington impacts events in Africa. In an era of high-tech and cyber-warfare and smart weapons, symbolic acts and individual choices still matter in real life–at least as depicted in this book.

The book feels like a stand-alone novel, but there are enough breadcrumbs left behind that I could see at least one sequel coming with a few of the characters reprising their roles in a new conflict. I hope so. Greaney and Rawlings make a good team, and Red Metal is a fun and breathtaking read.