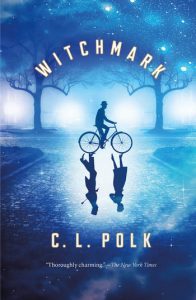 One of the best books of 2018, according to NPR, Publishers Weekly, BuzzFeed, the Chicago Review, BookPage, and the B&N Sci-Fi and Fantasy Blog.

Dr. Miles Sanders just wants to take care of his patients. In this, he is like many doctors. What sets him apart is that he is a witch, part of a magical family, and the demands of his gifts and his family threaten to pull him away from his calling as a physician. In Witchmark, C.L. Polk creates a compelling fantasy world where witches are either part of the ruling class, are enslaved to serve a member of the ruling class, or are locked up in asylums. What witches don’t do is serve in careers as doctors–even when many patients returning from war are presenting with magic-related illnesses that threaten the very country itself.

When a dying murder victim reveals Miles’s secret, and when his family discovers where he is, Miles is forced to use his intelligence and his skills–magical and medical–to investigate the death. Throw into the mix an impossible ally from a race lost to legend and you have a fast-paced story with mystery, betrayal, and romance. Miles discovers that he cannot escape himself or his family–but perhaps he can redefine himself.

I really liked this book, finishing much of it in a single sitting. The writing is clever and sharp, the story moves along briskly with numerous turns and angles, and the climax is powerful and somewhat unexpected. Miles is a likable protagonist, and his interactions with the other characters are authentic and true to their personalities. The world is built with layers upon layers. Other reviewers have compared it to Edwardian England, but with witches. Miles’ talents are revealed and grow throughout the book, and although he is regarded in that society as a second-rate witch, that says more about the culture and the world than it does about his gifts.

Witchmark is the first book of a proposed series, and I am looking forward to the publication of the sequel next year. C.L. Polk has done a marvelous job in this first novel. Witchmark deserves the accolades it has received, and Polk is an author to keep a lookout for.