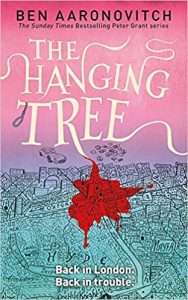 Back in London, apprentice wizard and PC Peter Grant gets a most unwelcome phone call. It is from the goddess of the Tyburn river. Her daughter has been caught up in a situation. A young woman has overdosed during a party. Tyburn’s daughter was at the party, Grant owes Tyburn a favor, therefore Grant must make the situation go away.

Except, nothing is easy when magic and goddesses and their progeny are involved. The unfortunate victim was a practitioner of magic, Tyburn’s daughter confesses to the police that she supplied the drugs, and before he knows it Grant is in the middle of large expensive things being destroyed. Again. And readers are in the middle of another entertaining story where Grant faces challenges from Lady Tyburn, other police officers, Lesley and the Faceless Man, and perhaps his greatest nemesis of all: his own mother.

Oh, beware the mother who is longing for grandchildren! Grant is enjoying his relationship with Beverly Brook, Lady Tyburn’s younger sister, but his mother is ready for some babies and that is not a complication he is looking to add to his life right now. Some of the funniest moments in the book are when his mother pulls him aside for a serious talk, and suddenly I was transported back to walking into the house after my honeymoon and hearing my wife’s mother ask, “So, any grandchildren yet?”

Aaronovitch may be from England, his character Peter Grant is from London, Grant’s mother is from Sierra Leone, and somehow they all captured a family dynamic that, although not universal, is certainly not unique. And that is part of why this is such a special series. Grant may be a biracial British police officer/wizard apprentice. But the writing is so good, the jokes are so human, the result is a series that gives even middle-aged midwestern Americans a lot to identify with and a lot to laugh with.

The Hanging Tree is an excellent addition to a wonderful series, and Ben Aaronovitch just keeps writing delightful stories. I am thoroughly hooked on this series.