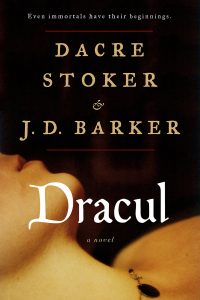 You know, I like sleeping. I like dreaming. I like pleasant dreams, with sunshine and laughing children and small animals gamboling about. Beaches are nice: warm sand and inviting waters with my wife at my side. Those are the kinds of dreams I like when I sleep.

So why on earth did I choose to read Dracul? Because, let me tell you, it is not conducive to gentle slumber with happy dreams!

OK, it’s October, and we are featuring Halloween-appropriate books this month. And a prequel to the classic Dracula, written by Bram Stoker’s great grand-nephew Dacre Stoker and the wonderful writer J.D. Barker certainly meets that criteria. Dracul is scary, creepy, and a great read. Stoker and Barker had access to Bram Stoker’s original notes and drafts, and from those and their own gifted imaginations have created a horrifying tale, one that purports to tell the original connection between Dracula and Bram Stoker.

Told through journal entries and letters from Bram Stoker, his sister Matilda, his brother Thornley, and the shadowy figure Vambrey, the book opens in 1868 with a 21-year-old Bram in a desolate tower trying to hold an ancient evil at bay with crucifixes, holy water, and a rifle. It is the longest night of his life, and he is trying to document what is happening in case he does not survive. The book then shifts back and forth from the scene in the tower to journal entries from Bram and the others, setting the stage for the battle occurring in the tower.

Bram had been a sickly child, not expected to survive, until one night his nanny Ellen Crone barred everyone from his room and did something…well, for quite awhile we are not sure just what she did and I won’t give it away here. Suffice to say, Bram’s health improved after that, but soon thereafter Ellen left abruptly. Bram and Matilda had reason to be suspicious of Ellen and wondered about that sudden departure, but could do no more than speculate about it for several years.

Then, years later, Matilda pulls Bram aside with some astonishing news. She has seen Ellen Crone, who has apparently not aged at all, in Paris. At this point things begin to develop quickly, and saying more would give too many spoilers away, but the action heats up and the creepiness factor goes into overdrive.

Bunnies are nice. I like dreams with cuddly bunnies in them. I may have to borrow my granddaughter’s stuffed companion for a few nights after this book.

Stoker and Barker set the temperature on their stove to boil slowly, but when the plot starts bubbling they never turn it down to a simmer until the very end. Clearly Bram Stoker survives that night in the tower–this is a prequel, so that shouldn’t be a spoiler–but the authors make it easy to forget that during the telling of the tale. I can’t say this is a book I couldn’t put down. Rather, it’s a book I had to put down at times just to come back to reality and stop my heart from racing. Dracul is an intense and exciting book, one that definitely has a place on anyone’s Halloween bookshelf. If you don’t like reading about vampires or gothic-style horror novels, this is not the book for you. But if you enjoy a book that will inhabit your nightmares for awhile, Dracul is a terrific read.

Though, you may want to borrow a child’s stuffed bunny to cuddle afterwards.