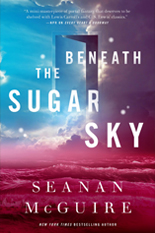 Seanan McGuire has an extraordinary gift for springing the unexpected upon you in a way that makes you think, “No way, of course it’s that way!” So when a major character is both fat and athletic because she is most at home in a water world where she has gills and lives with mermaids it’s obvious that it has to be that way. She’s just living in the wrong world: ours. Or when another major character is revealed to be transsexual, because in our world he was raised as a little girl but he found that he actually belonged in a world where he could be the hero and wield a sword and rescue people and then got stuck back in this world where he did not fit properly, it’s obvious it has to be that way.

So, when Rini, a teenage girl, drops from the sky with sugar-spun clothes that melt away in the pond and announces that she needs her mother–a mother who was already dead, who had died as a teenager without ever having children, well, it had to be that way. The girl was being unmade. If the students at Eleanor West’s Home for Wayward Children could not bring her mother back, Rini would never be born, her world would never be saved, and that would simply be unacceptable to her.

A quest it is, then, through worlds of the dead and worlds of the absurd, where time is not linear and the dead are not as dead as you think they are and new realities get baked into existence if the recipe is creative enough. Where the King and Queen of the Dead are helpful, for a price, and the Queen of Cakes is most decidedly unhelpful at any price.

McGuire builds worlds that don’t fit properly in this world, and populates them with characters that don’t quite fit either. That is meant entirely as a compliment, not a criticism. Her characters are gay and straight and male and female and trans. She has a boy in love with a skeleton girl, a girl who is at home in the water but has to live on land in our world, a girl from a land of cakes and sugar and cookies. She opens doorways to new worlds that work perfectly for those who fit them, but are as uncomfortable for us as our world is for them. She does not reject our reality, but neither is she bound by it. The result is a fantasy that is both hopeful and fearful, one that acknowledges that our world does not do difference well but one that also celebrates difference and respects that there are people who do not judge but who help others hang in there until their own door appears.

Seanan McGuire has a unique voice, one that finds beauty in darkness and finds the normal in the different. Beneath the Sugar Sky is not your typical quest fantasy–but you don’t read Seanan McGuire hoping for “typical” anything. You read her books looking for something different. Unique characters, strange worlds, empowered people with differences. Fat (her term) girls who are athletic, trans heroes, girls missing arms who become the queen of turtles: those are the characters you look for in Seanan McGuire fantasies. In other words, you look to her for a world where you could be the hero, where you don’t have to be the buff demigod type to make a difference, where you may not be the smartest or the strongest or the greatest, but where just by hanging in there, people just like you make a difference.