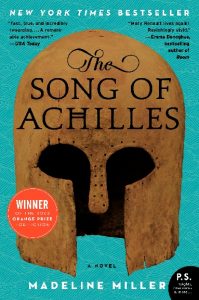 This book is titled, The Song of Achilles, but the main protagonist is the singer of that song, Patroclus. Patroclus does not figure prominently in the original myths, but Achilles’ grief at his demise provides the motivation for Achilles to go into battle against Hector and kill him. Madeline Miller has taken that small but pivotal piece of the Trojan War stories and, along with the more substantial stories about Achilles himself, created an amazing and lovely story of love and coming of age.

In Miller’s book, Patroclus is raised as an exile, sent to Achilles’ home after an accident that made him persona non grata in his own kingdom. The two boys become friends, then become much more than friends. Finding a soulmate in the other, Patroclus follows Achilles first to his time of education under Chiron, then to his time in hiding (spirited away by his goddess-mother, Thetis). Despite Thetis’s disapproval, the love between the two young men is so strong they cannot be separated. When the call comes to go to war against Troy, they answer it together.

Achilles was known as “the best of the Greeks.” Patroclus had no such title for most of his life. He was a mediocre warrior. He was no scholar. But he kept Achilles grounded. He reminded the son of a goddess how valuable it was to be human. Patroclus wanted to keep Achilles alive. But at the end, when Achilles’ hubris threatened the entire Greek cause, Patroclus reminded him that mortality was part of that humanity.

We reviewed Miller’s second book, Circe, a few months ago. Both books take relatively minor characters from the Greek myths and put them front and center in new and exciting ways. Miller takes familiar (or not so familiar) material and refreshes it to make it her own. The love story between Patroclus and Achilles, the willingness of each man to do anything for the other, and the rise of Patroclus from bit player to central figure makes The Song of Achilles an amazing story, one that should please both scholars and those of us less familiar with the source material.