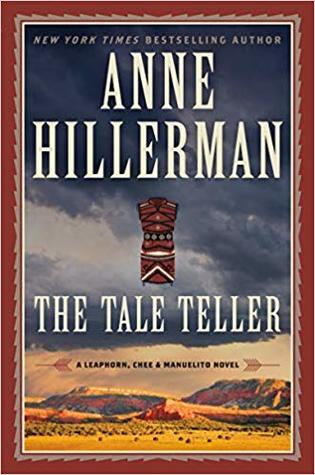 Anne Hillerman’s The Tale Teller returns to the Dinetah and to the beloved characters who populate her books (and her father’s books before her). Retired police detective Joe Leaphorn still takes on consultations that interest him as a private detective. When the Navajo museum asks him to look for a missing donation, a dress that may have belonged to a famous woman in Navajo history, he cannot help himself…even if the person making the request is a bit demanding. A possible suspect in the theft of the dress dies shortly after he begins his search, and suddenly his investigation takes on a new importance.

Bernadette Manuelito was enjoying her day off by going for her morning run. Nothing interrupts a police officer’s day off, though, like finding a murder victim along her running trail.

Her husband, Jim Chee, is investigating a burglary, but quickly finds that it is a larger problem than just one stolen item. And he has been asked to mentor a rookie officer whose misogyny and arrogance threaten to derail his career before it begins.

Hillerman specializes in taking multiple threads and drawing them together, and The Tale Teller is no exception to this. Leaphorn and Manuelito both become involved with the burglary investigation and interact with the rookie officer; Chee and Leaphorn contribute to Manuelito’s murder investigation, and Chee and Manuelito assist Leaphorn in his search for the missing dress. That is not to say all three situations are ultimately the same…but I want to avoid spoilers. I’ll just say that the interaction between the three main characters is one of the delightful aspects of Hillerman’s writing and one of the things that brings me back to her series book after book.

Fans of the series will likely enjoy this latest offering, and people looking for a good mystery with well conceived characters should consider jumping into the series at any point. It’s worth going back to the very beginning of the series by Tony Hillerman, but each of Anne Hillerman’s works can stand alone and all of them are fascinating and well done.