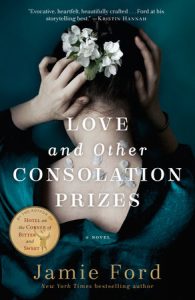 I went into this novel with no previous information, only knowing that the author Jamie Ford would be visiting my hometown next month (Schlow Library, State College, PA, September 21, 2019). I came away with the kind of joy that only an exceptional novel can give. Love and Other Consolation Prizes is a special story, one that will stay with me.

Ernest Young was born to a Chinese mother and a European father somewhere in China. His parents were unmarried, his father dead, and his mother destitute. In desperation, she sends her son to America where he is given the name Ernest. After several years as a charity student in a boarding school, Ernest is taken to the 1909 World’s Fair in Seattle–where he is raffled off in an auction and taken to live at Madame Flora’s bordello as a houseboy.

There he meets two girls, or rather is reintroduced to one of them. Fahn was on the ship to America with him many years before. Also sent to America by desperate parents, she is Japanese. Maisie is Madame Flora’s daughter, though for business reasons she is usually introduced as her little sister. These girls look out for Ernest, and he looks out for them as well.

The story shifts back and forth between 1962 and the earlier period. In 1962, a second World’s Fair came to Seattle. Ernest is now much older, and his wife Gracie is struggling with dementia. As their daughter Juju seeks to learn the truth about a boy named Ernest Young who was raffled off at the previous World’s Fair, Ernest struggles with how much to tell her about that time and especially about his life in the brothel. There are some secrets all parents keep from their children, but there are some secrets that can change lives.

Jamie Ford has clearly done tremendous research into the lives of Asian Americans during the early 1900s in Seattle, into the Tenderloin district of brothels and bars, into the suffragettes and the morality fighters who strove to change society, and into two World’s Fairs. At one, the winning raffle ticket for a little boy was drawn for the crown by President Taft. At the later one, giveaways of poodles were halted because it was deemed too cruel. Quite a societal change–yet 1962 was still a time when women and minorities were marginalized. Things were improving, but there was a lot of room for them to get better yet.

Although he is a minor character, Ernest’s friend Pascual caught our attention. As a mixed family, white and Filipina, Pascual rang very true to us. From the use of Tagalog terms like “kuya” (essentially, “older brother”) to English idioms like “close the lights” it was clear that the author had some familiarity with Filipino Americans. This was very fun and refreshing for our family, and we enjoyed reading every scene with Pascual in it.

Love and Other Consolation Prizes is a warm and beautiful book, filled with wonderful characters, terrific settings, and poignant stories. Jamie Ford is an excellent writer, and we will have to look for his other books. I hated to see this one end.