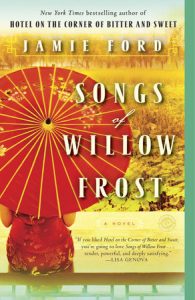 Jamie Ford has become one of my favorite writers, and his novel Songs of Willow Frost has only cemented his place in my heart. It is the story of William Eng, a Chinese-American boy being raised in an orphanage in the 1930s. His mother gave him up for adoption when he was seven. Now twelve, he thinks he may have found her. Together with his friend Charlotte they plan to escape the orphanage, find his mother, and…well, he’s not sure. Is the woman he saw in the poster his mother? The woman is a famous actress and singer from Hollywood, Willow Frost. His mother was just his mother, Liu Song Eng, living in Seattle’s Chinatown. And why did she send him to the orphanage to begin with? The answers to these questions form the basis of this winsome and wistful story.

William is a wonderful protagonist. His love for his mother and his affection for Charlotte guide his steps throughout the novel. His experience in the orphanage as the only “Oriental” child is wrenching, though his friends Sunny (a Native American boy) and Charlotte (a blind Caucasian girl) help make things tolerable. When Charlotte suggests they flee the orphanage to find Willow Frost and reunite his family, William is willing to do it with her. But he is aware enough to ask a myriad of questions. What if he is wrong and she is not his mother? What if he is right, but she does not want him? What if she does not remember him at all? How can two twelve-year-olds survive on the streets of Seattle if their plan does not work? Despite his concerns, the two of them embark on their adventure, and William finds that the answers to his questions are very challenging to hear.

In these days when mixed-race relationships are commonplace, when equal rights are a matter of law (if not always a matter of fact), when Chinese-Americans are even running for president, it is hard to remember that only a couple of generations ago things were very different. Chinese could not immigrate to America. Many states banned interracial marriages. If a Chinese-American married a Chinese citizen, he or she lost their American citizenship and would have to move to China. This was the case even for those born in America. These and many other relics of the past are challenges facing the characters in this novel. It is worth remembering that as bad as things sometimes are, we have come such a long way. There is still a long way to go, but seeing how things were during my grandparents’ generation for Chinese-Americans, for single mothers, and for children in orphanages gives me reason to hope that we will continue to improve.

Songs of Willow Frost is an achingly powerful book that pulls heartstrings without pulling any punches. Jamie Ford is an exceptional writer, one who captures the Chinese-American experience in a very different time and culture, yet one that is only a few decades removed from our own. I thoroughly enjoyed this book.

Author Jamie Ford will be at Schlow Memorial Library in State College, PA on September 21, 2019. We encourage all of our local readers to come and hear him speak.