We made a Scintilla Road Trip to the National Book Festival in Washington, DC on August 31, 2019. To cover more authors, we split up and attended as many events as we could. Both of us (plus one of our boys) had a wonderful time, and thoroughly enjoyed listening to the speakers and spending time with thousands of other bookish peeps!

There were many authors there we have featured on scintilla.info, more than we could possibly have seen. There were also some who have pending reviews, and a few more that we intend to feature when we can. Dave focused on some of the genre writers, while Maria went to presentations by children’s authors.

In the genre writers, a presentation by Western writers included Anne Hillerman (we’ve reviewed Cave of Bones and Song of the Lion. Her latest is The Tale Teller, which we will feature sometime this autumn). Although she had to share the stage, her story of how she started writing fiction and how her characters “spoke” to her fascinated the audience. She may not be Navajo but she clearly loves the people and land of the Dine and her work reflects that affection and care. 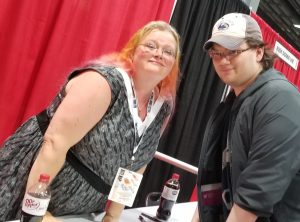 Seanan McGuire (who also writes as Mira Grant) has been a frequent presence on our blog. We absolutely love her books. Recently, we’ve reviewed Girl in the Green Silk Gown (McGuire) and Into the Drowning Deep (Grant). She spent the entire time in a Q/A with the audience, which everyone seemed to really enjoy. Many of the questions dealt with her work with Marvel, as she writes the SpiderGwen comics, but she also spoke about her different series and shared a funny story about a swan in Ireland. (Probably should not try this at home, kids.) 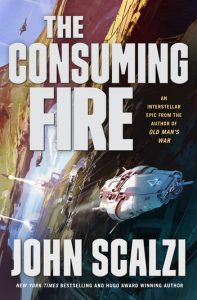 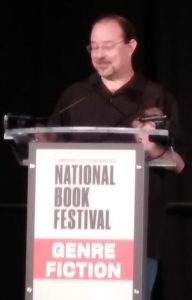 John Scalzi spoke about his book The Consuming Fire, and shared a short story he wrote about a customer service “helpline” that might give me nightmares. Scalzi shared that we readers are part of the creative process of any book. The author has his/her/their thoughts about what is being written, but the reader also brings experiences and opinions and the current world into the books and those are also part of the story. 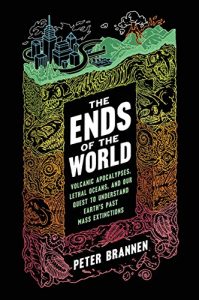 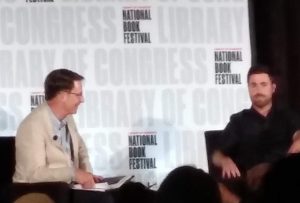 Peter Brannen discussed his book The Ends of the World with an interviewer. Considering we may be in the midst of the sixth great extinction, his comments on the perils of anthropogenic extinctions from pollution, deforestation, climate change, hunting, urbanization, etc. were eye-opening. There are some frightening parallels to the changes we are making in the chemical composition and temperature of the atmosphere and the oceans to things that happened before. 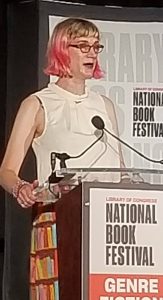 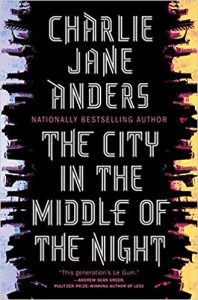 The final presentation we attended was by Charlie Jane Anders, author of The City in the Middle of the Night. She talked about her childhood with a learning disability and her debt to a teacher who saw past that to the talent and heart that was inside. She was very warm and touching, and her tribute to that one teacher was extended to a tribute to so many teachers who make a difference in the lives of children. 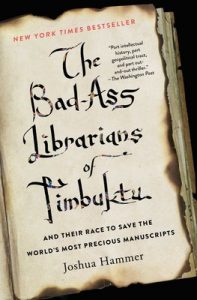 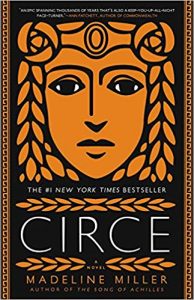 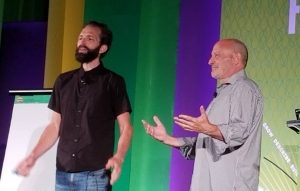 Jon Scieszka (author & father-in-law) and Steven Weinberg (illustrator & son-in-law) described the creation of their new book AstroNuts Mission One: The Plant Planet, the first in a new series for middle school readers. The focus of their delightful presentation was “How the Book was Made” and how young authors and illustrators could use the same resources they used to make their own artwork. 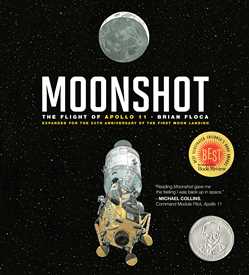 Brian Floca walked the audience through the process of creating and updating the anniversary edition of Moonshot: The Flight of Apollo 11 with 8 extra pages in order to better express the sublime beauty and frightfulness of space. 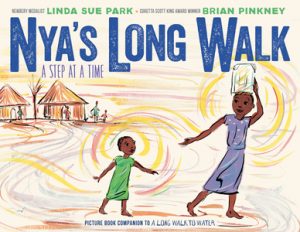 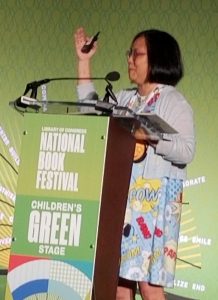 Linda Sue Park launches her new book Nya’s Long Walk: A Step at a Time which confronts the challenge of dirty water and poverty in a third world county. This book is a companion to A Long Walk to Water based on the true story of the need to supply a Sudanese village with clean water. With sensitivity and passion, Park advocates the reading books to children even if the topics are difficult and emotional.

Sherri Duskey Rinker shared her new book Three Cheers for Kid McGear! the latest in The Goodnight Construction Site series. Rinker shared how the idea for the book developed from the love of her youngest son for trucks of all kinds to the exuberant response of the kids in the bean bag gallery in front of the stage. 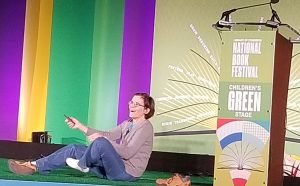 Cece Bell launched her new book Chick and Brain: Smell My Foot! the first of a new series for early/beginning readers. Inspired by the Dick and Jane books which helped her learn how to read, Bell wanted to create a fun series to encourage new readers with humor and quirky comic illustrations. 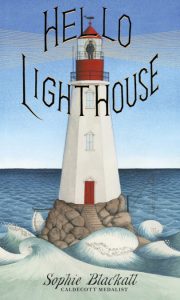 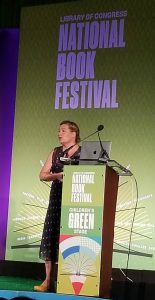 Sophie Blackall discussed her international book tour for Hello Lighthouse which won the 2019 Caldecott Medal as well as the travel and research necessary to create the book. Blackall described the reactions of her international readers to the book and how readers bring their own perspective to a book. 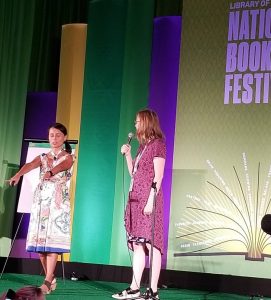 Shannon Hale and LeUyen Pham launched their new book Best Friends for middle school readers. They described how their own growing up experiences helped shape the book and they encouraged young writers and illustrators to be persistent and pursue the challenges to a career in publishing.

If you haven’t been to a National Book Festival, plan to go to Washington DC for this free event. It is an amazing gathering of authors and readers, and you might even run into a pair of book bloggers playing avid fanboy and fangirl while you’re there. 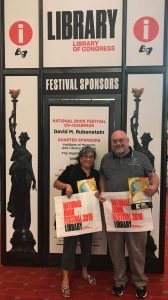 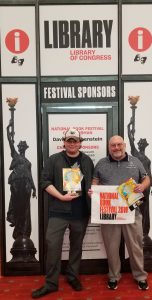