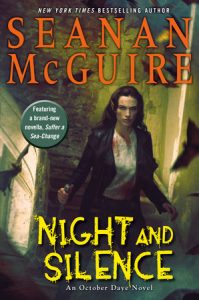 October Daye is a knight of the realm, a fae/human changeling, a hero, a private investigator, betrothed to a king of cats, niece to the sea witch, and daughter of one of the Firstborn. So kidnapping her daughter would seem like a bad idea. Yet someone has done just that. Given that she has just returned from rescuing her real sister after she had been missing for 100 years, given that her fiance is still recovering from the trauma incurred during that time, given that she has not had enough sleep after capturing some flying hedgehogs which were wandering through San Francisco, pissing her off is not a good thing. Someone is going to pay. She just needs to find out who.

Night and Silence is the 12th installment in Seanan McGuire’s October Daye series. If you have followed the series, the characters are familiar: October, her fiance Tybalt, her “sister” May, her squire Quentin, and several other recurring characters unite to find her missing daughter, Gillian. Gillian has rejected the fae, choosing to live as a human. But when she needs help that doesn’t matter. Anyone who knows October realizes that she will do anything for her family–in fact, they are counting on that. Nothing will stop her from coming after her daughter. Not even a Baoban Sith: a vampire.

Fairy tale heroes are supposed to stride through their stories larger than life. They are not troubled by bitter exes. They are not rejected by teenage daughters. They are not hurting from damaged fiances. They are not wounded by enemies to the point where rooms are “painted” by their blood. Those heroes live happy, victorious, untroubled lives, far away from the dangers of Seanan McGuire’s imagination. October Daye does not have that luxury. Her heroics occur in a darker, more difficult world, one where people she loves are hurt and die and disappear and fight and sometimes break their hearts.

McGuire’s fiction may be labelled “fantasy,” but there are horror elements to it. Still, her characters are always complete and pitch perfect. In a world too mature to expect heroes to be without flaws, October Daye wears her flaws proudly, as badges that reveal her journey. They are not weaknesses. They are signs of triumph, wounds that show just how far she has come. They do not disfigure. They add depth, character, signs that this fictional half-fae creature is just as human as her readers.