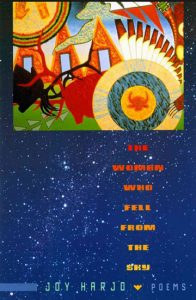 Poetry: The Woman Who Fell from the Sky, Joy Harjo

This autumn, Joy Harjo will begin her term as the 23rd Poet Laureate of the United States. She is the first Native American to hold this title. A member of the Muskogee Creek Nation, this Oklahoma poet has been an ambassador for Native Americans and for poetry for more than 40 years.

She is a poet and a musician, and in both of those roles she sees herself as a truth teller. Harjo’s poetry is not bound by form or rhyme. She rather looks to metaphor and analogy to express herself. One example from Conflict Resolution for Holy Beings is her poem/song Rabbit Is Up to Tricks. Rabbit was lonely, so he created man and taught him to steal. But the man stole everything: grain, gold, wives, animals. So…

Rabbit tried to call the clay man back,

but when the clay man wouldn’t listen

Rabbit realized he’d made a clay man with no ears.

Perhaps more overtly political is the title poem from Conflict Resolution for Holy Beings. Using statements on conflict resolution juxtaposed with broken promises and treaties between Native Americans and Washington, she condemns the abuses by the majority population using their own words.

The Woman Who Fell from the Sky has prose poems along with commentary by the author. Most of the poems tell stories of Native Americans struggling to hang on to their identity in a hostile world. They are often blunt, or as another reviewer put it, “stark and unadorned.”

Joy Harjo’s work is direct, honest, and often painful. There is a beauty in the pain, though, that shines through. The truth that she tells is one we need to hear, and hopefully her role as Poet Laureate will amplify her voice.