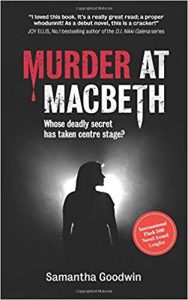 When aspiring actress Nikki Gowon takes the stage for her final scene as Lady Macbeth, she has no idea that it will be her final scene. As she had done countless times in rehearsal, she takes the prop knife and thrusts it into her belly. Only, someone has substituted an actual knife for the prop knife. Instead of collapsing harmlessly in her hands, the knife plunges into her body and does enough damage that the wounds eventually end her life. Murder at Macbeth takes the cursed play and ups the drama significantly.

Detectives Finley Robson and Nadia Zahra have no shortage of suspects. Anyone in the play, from the director to the cast, could potentially have done it. And as they investigate, a plethora of motives come out. Nikki was given the role late in rehearsals. Could it be Emma, the actress who lost the role to Nikki? Could it be Nikki’s boyfriend, Jimmy? Her onstage lover, Ben? The director, Neil? Or someone else entirely? Her best friend Megan and Megan’s boyfriend Peter were also in the cast. Even teenager Violet seems to have something to hide. As they proceed with their inquiries, they find that even an amateur play can have a lot of drama backstage.

Fans of Shakespeare will enjoy the constant references to his plays, in the chapter headings and in the body of the book as well. Obviously most of the references come from Macbeth, but other works get a shout out as well. And fans of mysteries will appreciate the multiple threads Goodwin weaves together in her book. She does a good job of revealing information piece by piece, so the reader is discovering information along with the detectives. I liked the way that the murderer was found using a combination of deduction and detection. Good old fashioned police work, questioning suspects, chasing leads, checking CCTV, gets highlighted in this book, and the police who do that labor never seem to get enough credit. Goodwin makes sure to note the hard work involved.

All in all, this was an easy book to get lost in for awhile. I enjoyed the characters and the story, and appreciated the hard work the detectives and uniforms did to find the killer. If you are looking for a solid mystery and for the chance to support a new author, Murder at Macbeth is a book I would recommend.