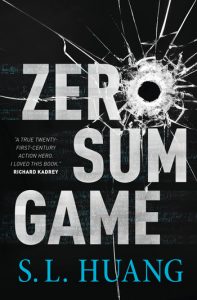 Cas Russell is a kickbutt math whiz. Literally. She is able to instantaneously perform the calculations in her mind that let her leverage her body or a projectile in such a way as to perform maximum damage. She can determine where and how to hit someone so that they are injured or killed. She only needs one shot to hit her target. Her body is a weapon, and weapons in her possession are deadly.

Cas is a retrieval specialist. She has been hired to retrieve a girl being held prisoner by a drug cartel. Normally this would be no problem for her, but her long-time ally, Rio, is undercover in the cartel and is not willing to break cover–even for Cas’s sake. He is perhaps the one person good enough to capture her, and he has done just that.

That is the opening of Zero Sum Game, and the thrills and stakes go up from there. Cas is not the only person in the story with extraordinary abilities, abilities that might be regarded as superhuman. Victims become oppressors, allies become enemies, and as the book progresses Cas finds that she must question herself as much as she questions anyone else.

S.L. Huang has a math degree from M.I.T., and math plays a major role in this book. But don’t let that scare you away. You don’t need a math degree to appreciate the breakneck plot. Or the breaking of necks within the plot. Cas Russell is a true thriller heroine, with a moral code (of sorts), brilliant friends and the ability–and willingness–to do whatever needs to be done.

Zero Sum Game is one part science fiction, one part action thriller, and one part geeky fun. I thoroughly enjoyed it.