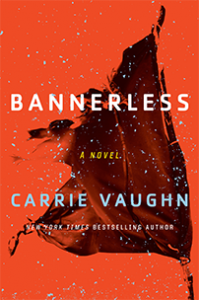 In the dystopian future, being “bannerless” could mean any number of things. Many of them are not good. On the least pejorative side of the meaning, one simply has not yet earned the right to receive a banner. Banners are given when one has earned the right to have a child. Young households, households that have not yet proven they are self-sustaining and able to follow the rules of society, are bannerless until they prove themselves. However, one can also become bannerless by violating society’s rules. Becoming pregnant without a banner can result in an entire household becoming bannerless for years. Other violations can also remove the possibility of a household receiving a banner. Possibly worst of all, if a person is born without a banner, that stigma attaches to him or her for a lifetime–although it was clearly not the baby’s fault. Being bannerless is a difficult burden to bear.

When they arrive in Pasadan, they find a town in disarray. The council is dominated by a bully. Questions arise about other possible violations. The only thing everyone seems to agree on is that no one really liked the dead man, and he did not like anyone else. In the midst of this drama, Enid finds a more personal drama at hand: her former lover is now living in Pasadan.

Carrie Vaughn walks a fine line with aplomb. Bannerless is a police procedural set in a complex future world. She manages to keep the plot moving while building this world, setting up the foundations and the rules of the Coast Road communities at the same time as she uncovers the clues and reveals the denouement gradually. Enid is a dogged investigator, able to set aside both her complex history with former lover Dak and a personal tragedy that occurs near the end of the investigation in order to find the truth. When she reveals it, the full implications of becoming Bannerless will be revealed to both the characters and the readers.

Bannerless is a fascinating book with a complex world and a compelling protagonist. I am glad Carrie Vaughn is continuing to explore this world in her work, and I look forward to reading her next novel.