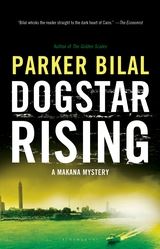 Detective Makana has decided to help the son of an old friend. The son is in love with a girl whose father needs some investigative work done. This inauspicious beginning leads Makana to a small travel agency and possibly to the answer for a question he did not know he was asking.

Dogstar Rising is the second Makana mystery by Parker Bilal, and it is brilliant. Again set mostly in Cairo, Makana is both dogged and brilliant. Refusing to be put off the case by crooked officials, physical intimidation, bribes, or threats, Makana insists on pursuing the truth. When a young woman in the travel agency is killed right in front of him, Makana will stop at nothing to find justice for her.

Makana finds himself pursuing multiple mysteries during the course of this book. The death of the young woman, which may or may not be related to the investigation of the travel agency. The gruesome murders of several children in a slum area of the city. A mysterious priest with a shrouded past. A monastery with a scandalous secret. And the possibility that his own daughter survived the car crash that he thought had taken her life ten years before. And not to give away any spoilers, but the skill with which the author draws these sundry plots together is quite impressive. Makana is part Sherlock Holmes, but much more is simply unstoppable, following lead after lead even when it looks like they might take him directly to his own death.

The book is set in the summer of 2001. This becomes very meaningful in the last scene of the novel, which takes place in a cafe on September 11. Reading the reactions of these (mostly) Egyptians, I was reminded of the fact that 9/11 was an attack on the entire world. Sometimes our American sensibilities are so focused on America that we don’t acknowledge that most people around the world, including in the Middle East, were aghast and horrified by the attacks that day. These may have been fictional characters in this novel, but the reactions are very much what I have heard from other sources and from friends around the world. True, there were people who celebrated. There were many more who wept.

In two books this has become a favorite series of mine. Fortunately for me, there are several more in the series already in print, so I don’t have to wait for the next one to come out. I just have to get over to the library for it!