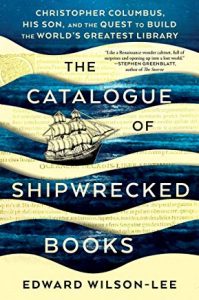 In 1492, Christopher Columbus set sail from Spain to find western route to China and the Indies. As everyone knows, what he found instead was what became known as the “New World,” lands full of new people, new plants, new animals, and new opportunities for the Europeans who came. For the inhabitants of those lands the arrival of the Europeans was a disaster, bringing slavery, conquest, disease, rape, and catastrophe. For everyone involved, the world changed in 1492.

One thing Columbus left behind in Europe during this voyage was his young son, Hernando Colon. Colon (the Spanish version of the name Columbus) was the son of Columbus’s Spanish mistress, and although the explorer never married his mother, he always acknowledged Hernando to be his son and treated him like a son. In his book, The Catalogue of Shipwrecked Books, Edward Wilson-Lee tells the story of this younger son of Christopher Columbus, a man who tried for his entire life to live up to his father’s legacy. In some ways, Hernando was a man far ahead of his time. However, when you are the younger child (and not a child from a marriage) of the man who “discovered the New World,” you’re never going to quite live up to your legacy.

Wilson-Lee is an excellent writer, and he does a very nice job capturing Hernando from the available source material. Much of what we know about Hernando comes from what he wrote about his father. Hernando idolized his father, eventually writing a biography of him that was part legal defense of his family’s claims for land and power and part historical defense of his father’s role in discovering Hispaniola and other places. Hernando accompanied his father on one trip to the Americas, surviving a mutiny and shipwreck during the trip and watching his father become quite ill during the adventure.

Often forgotten in the very mixed legacy of Christopher Columbus is that his legacy was not universally accepted or respected even during his own lifetime or that of his sons. Other members of his own crew tried to diminish his accomplishments, one even racing back to Spain to claim credit for the discoveries they had made before Columbus could arrive. Columbus never received everything promised to him by the Spanish crown, both because of his own mistakes (and those of his family members) and because of European politics interfering with financial rewards and decisions. On one occasion Columbus was returned to Spain in chains–and symbolically he requested that he be buried in those chains upon his death.

The more questionable parts of Columbus are well known to us today. Although he himself was not as personally genocidal as he is made out to be by some, he certainly was not kind or benevolent to the natives he found. He did bring slaves back to Spain and imported African slaves to Hispaniola and other islands. He never acknowledged that he had found a “new” continent but insisted until his death that he had found the route to Asia. He greatly underestimated the circumference of the earth. Some of these issues plagued his legacy even within Hernando’s lifetime. As Hernando fought in the courts (both legal and royal) to preserve some of the promises and gifts made to his father by the crown, he glossed over some of these issues in his biography of his father in order to improve Columbus’s reputation. For this biography, he had one thing going for him that no one else did: the largest library in the world.

Hernando was a book collector. By the time of his death, he had over 5000 books. One of those books was his “Catalogue of Shipwrecked Books,” a list of over 1000 books of his that were lost at sea. Hernando created ways of cataloging, organizing, and indexing books that were unlike any that had been tried before. In some ways, he was trying to create things that simply could not exist until the digital age. Hernando also worked on ways to map the world, including ways to measure longitude that were not fully discovered and employed until more than a century later. It is hard to say what his legacy truly was: his library fell into disuse and disrepair after his death, his cataloging and indexing methods simply could not be fully realized until computers came along 500 years later, his tools for measuring longitude were never adopted and had to be independently created much later. What we can say is that just like DaVinci’s helicopter, Hernando had ideas that were beyond his time but which we can now appreciate as being ingenious.

Hernando Colon may not have been the most famous person in his family or of his time. But he was a fascinating person, not only because of his father. The Catalogue of Shipwrecked Books is an interesting story of an interesting man, one who largely shaped what we know about Christopher Columbus.