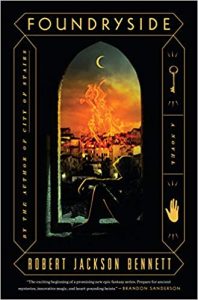 Robert Jackson Bennett is no stranger to SFF, having written Hugo and Nebula award nominated books. Foundryside is the first book in a new series, the Founders trilogy, introducing complex new characters into a challenging new world. Bennett sets up a series of complex rules governing the use of magic in this world. He then proceeds to break almost every one of them.

How much fun is that?! My granddaughters love building towers of blocks. They love kicking them down even more. Bennett builds a world based on a specific set of rules, then uses the rest of the novel to ask, What if those rules could be broken?

Sancia Grado is a thief. She is very good. Maybe the best. When she is hired for a huge amount of money to steal a nondescript box out of an ordinary safe, the deal seems too good to be true. Despite her instructions, she opens the box and finds…a key.

With this discovery, we readers realize that Bennett is already breaking the rules of his own world. Sancia is magically enhanced, which allows her to hear the key. Except, humans cannot be magically enhanced. That’s supposed to be impossible. And tools cannot have personalities or talk or have memories. That’s also impossible. Sancia and the other characters recognize that these things are violations of the natural laws they’ve been taught cannot be changed. Figuring out how these laws are being broken, and why, is part of the fun of this novel.

Bennett brings together a community of intriguing, often flawed and hurting characters. Sancia is a former slave and a victim of cruel experimentation. She finds common cause with a “founderkin” (essentially nobility in this world) who was the sole survivor of a military catastrophe. Neither of them survived those experiences unharmed, nor do they or other characters escape damage in the course of this story. Not every character survives to the end of the novel. But every character experiences growth and/or change as a consequence of the events within the novel. That kind of character development sets this book apart from more ordinary stories in this or any genre.

Exciting plot. Great characters. Fascinating world, filled with rules that were clearly made to be broken, and which Bennett breaks with elan. Foundryside is an excellent book, and gives plenty of reasons to look forward to the next installment in this new series.