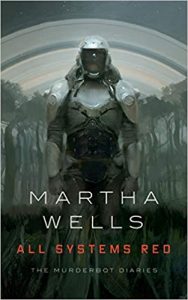 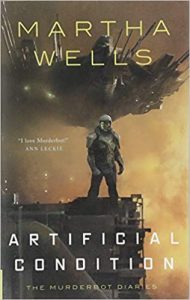 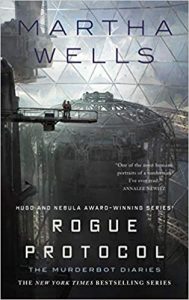 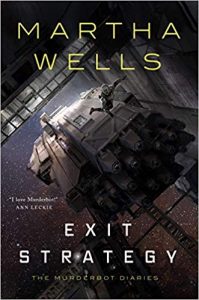 That can be hard to do when you are a programmed serial killing bot trying to escape a partially forgotten–rather, erased–past.

SecBot, short for Security Bot, is an artificial construct. Part organic, part mechanical, designed to provide security to humans in hostile conditions. Prevent them from being killed by hostile life forms. Try to prevent them from killing each other. SecBot is not human, though it looks very similar to humans. It is fully programmable. It is not supposed to feel emotions (or at least be affected by them), it is not supposed to be able to override its programming, it is definitely not supposed to be able to choose its own path.

Murderbot is a SecBot that was on a mining expedition when something happened. All of the humans were killed. The how is pretty straightforward: SecBot killed them. The “why” is a mystery. Most of those records were deleted. Only the organic, partially human, memories remain. They are confused, fragmented, lacking context and connection. But Murderbot does not want to kill humans unnecessarily, and it is sure that it was not supposed to kill all of the miners. So Murderbot overwrites its own programming to make sure that it is not forced to kill again. It names itself “Murderbot” so it always is reminded of that fact. And it desperately wants to find out how and why things went so bad on the mining planet.

We meet Murderbot first in All Systems Red. It is on a new security mission, working for the company that it has always worked for, this time guarding a group of planetary explorers. Things start going wrong when a mapping anomaly fails to warn of a hostile native animal. Murderbot saves its people, but that is only the beginning of the challenges facing the group. When a second group of explorers is killed and a third, previously unknown, group appears, it takes every skill Murderbot has acquired both from programming and from its own off-book efforts to keep its people alive. In gratitude, the group’s leader buys Murderbot from the company and sets it free.

In Artificial Condition, Murderbot decides to revisit the mining planet where it killed the miners and try to answer the question, “Why?” Receiving help along the way from an ART bot (I’ll let the readers discover for themselves what ART stands for), Murderbot arrives at the planet and is hired as a security consultant for some young researchers trying to recover stolen data. What should have been a simple exchange proves to be anything but simple, and again Murderbot is forced to improvise to keep its clients alive. Completing this mission and getting its information about the events that led to the miners’ deaths creates a series of challenges, but fortunately Murderbot is assisted by the timely help of a SexBot, err, rather, Comfort Assistant Bot. No, not THAT kind of help! Murderbot is not into that.

Murderbot has its answers, and in the process discovers that its clients from the first book are in need of more assistance. In Rogue Protocol, it decides to get some information for them that will hopefully end the corporation behind the planetary debacle. After sneaking aboard a ship bringing security consultants to assist with an investigation, Murderbot is discovered by Miki, a sentient PetBot fully loyal and obedient to one of the investigators. Miki agrees to keep Murderbot’s secret if Murderbot agrees to protect the investigators. When the security consultants prove to be on the side of the company being investigated and not on the side of the investigators who hired them, that job becomes significantly more difficult.

Finally, Exit Strategy sees Murderbot reunited with the team it first assisted in All Systems Red. Mensah, the team leader, has been captured by the corporation and is being held for ransom. Murderbot is not going to put up with this nonsense, and intends to rescue Mensah–even after discovering just how cool videos are on the large screen displays of hotel rooms!

Whatever you are doing, drop it. Get this series, start reading, move it to the top of your TBR pile and let it take over your life. Murderbot may not want to deal with humans, but trust me, we humans thoroughly enjoy dealing with Murderbot.

The entire series is smart, snarky fun. Murderbot is cynical, depressed, even torn between wanting to be more human and not wanting to be anything like those pathetic weak creatures it has to endure. With each novella well under 200 pages, I read through the entire series in just a couple of days. But don’t let the shortness nor the easy style fool you. These are brilliant books, full of truths about humanity that are packaged in the wisdom of a stressed rogue AI bot. The shelf full of awards should be its own indicator, but if not I will simply say it again: The Murderbot Diaries are brilliant.