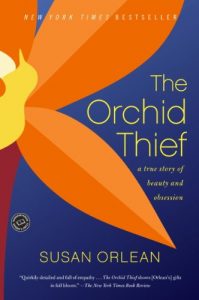 John LaRoche is described by author Susan Orlean as “the most moral amoral person” she’s ever known. When she first met him he was on trial for leading an expedition into the Fakahatchee swamp to collect rare ghost orchids. LaRoche told the judge, “Frankly, Your Honor, I’m probably the smartest person I know.” Orlean’s story on him and his trial led to this book, The Orchid Thief. Orlean crafts a story that could be a novel (and did become a movie) about an eccentric character in a world that seems to breed eccentricity faster than it breeds the very orchids which attract the fascination and obsession of thousands, in a state which is known for its excesses and odd characters.

There was a certain logic to LaRoche’s scheme. Native Americans are allowed to gather endangered species for tribal purposes. LaRoche is not Native American, but he was acting as an agent of the Seminole nation. He worked with three young Seminole members, who did all of the actual work collecting the orchids. LaRoche guided and directed their efforts, but he himself did not even touch the orchids.

Furthermore, his stated goal was to clone the orchids, mass producing them so that they were no longer rare. Thus, the pressure on the wild orchids would be removed, the Seminoles would have a ghost orchid gold mine, the legislature would see they had left a hole in the endangered species act and would fix it, and LaRoche would be the hero who made it all happen. And got rich by making it all happen.

Things didn’t quite go according to plan, but the plan did intrigue Susan Orlean enough to spend months in Florida with LaRoche. During her time there she also got to know many of the names in the South Florida orchid business, and became very familiar with the state itself.

Orlean is a very evocative writer. Her descriptions of wading through the swamp looking for ghost orchids made me want to do two things: go looking for the orchid myself, and go take a shower to wash the grime off. At one point she was so hot that her fingers were sweating. That kind of detail fills the book, giving it a richness that helps you smell the funk of the Fakahatchee, the sweetness of the flowers, the loam of the potting soil in the nurseries she visited. Between the heat and humidity and bugs and water and alligators and snakes and sawgrass and cypress trees and criminals carrying machetes (Orlean confesses she does not like hiking with criminals carrying machetes, even if those machetes are strictly to dissuade snakes from approaching them), Orlean makes multiple valiant efforts to see a ghost orchid in bloom. Frankly, I admire her tenacity. I might have lost my interest somewhere between the bugs and the alligators, long before the machetes.

I kept my phone beside me as I read so I could look up the different orchids and bromeliads she describes in the book, and I’m glad I did. Her descriptions are vivid, but I do wish The Orchid Thief came with full-color photos. No doubt that would have made it cost prohibitive, but it still would have been a nice addition to the text. I recommend doing something similar when you read it, and I hope you do read it. Orlean is a wonderful writer, and The Orchid Thief is a wonderful book.