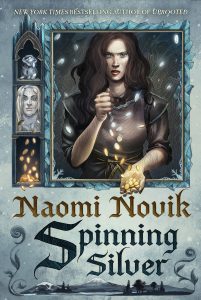 I didn’t particularly like Prince Casimir. He’d come to stay at my father’s house once, and I’d been beneath his notice, so he hadn’t been on his best behavior….He was nearly my father’s age, and a man who lived almost entirely on the surface. But he wasn’t a fool, or cruel. And more to the point, I was reasonably certain he wasn’t going to try and devour my soul. My expectations for a husband had lowered.

Spinning Silver is a sweeping reinvention of the Rumpelstiltskin fairy tale. Miryam is the daughter of a moneylender, one who is too nice to be successful. Frustrated at her family’s poverty and the disrespect her Jewish family faces, she takes over the debt collection business and changes their fortunes. However, she unwisely boasts of her ability to turn silver into gold while in the forest, within the hearing of the king of the Staryk. This fairy creature has silver but needs gold, and he gives her a bag of silver coins for her to turn into gold for him.

Miryam realizes that she has no choice but to obey. She takes the silver to a jeweler in the city, who melts it into a ring for the duke. The ring is sold and the purchase is made with gold coins. But, of course, the transaction was never going to be a one off, and more silver follows.

Irina is the daughter of the duke, of marriageable age but not particularly attractive or notable. However, the silver is magical, and the duke realizes that with the unmarried tsar visiting soon, magical jewelry on his daughter might attract the tsar’s eye. He purchases everything that Miryam can have made, and bargains are set that push two unwilling women into unwelcome marriages.

For the Staryk king has decided that a mortal with the gift of turning silver into gold would make a fine queen. And the tsar is not himself, but is possessed by a demon who wants nothing more than to take the life of one who can wear magical jewelry. Unless these two women can find a way to work together, their lives and the lives of everyone in two kingdoms may be forfeit.

Naomi Novik is a prizewinning author with both a John Campbell and a Nebula award to her credit. In her two latest books, 2016’s Uprooted (Nebula winner) and 2018’s Spinning Silver, she has begun a series of books taking Polish fairy tales and reimagining them. In this case, she has indeed taken the silver of a classic fairy tale and spun it into the gold of a marvelous fantasy novel.

Spinning Silver shifts back and forth between the perspectives of Miryam, Irina, Miryam’s servant Wanda, Wanda’s brother Stepon, and Tsar Mirnatius. It also shifts back and forth in time occasionally, retelling the same events from different perspectives. This can be confusing sometimes, but Novik usually does a good job distinguishing the voices and perspectives to help the reader stay with her. In a book that builds two worlds so fully, the human world where Miryam and Irina live and the Staryk world, the occasional confusion during a perspective change is a small challenge for the reader.

Novik does not shy away from legitimate social issues within her worlds. The Staryk world is very hierarchical. It is an icy world, gripped in winter. To protect his world from the demon living in the tsar, the Staryk king is quite willing to freeze the human world and kill all of the people living in it. That iciness is not only toward humans. Staryk are not given names until they are valued by someone willing to name them. It may be the most valuable gift a Staryk peasant can receive.

Miryam’s family are Jews. Because of this, they are resented and not trusted by the general population. Miryam’s grandfather, also a moneylender, could greatly advance his standing in the city if he converted. He refused. Miryam’s parents are despised in their small town, even though her father’s soft heart means he allows people to go for years without repaying their debts. To her credit, Novik does not assume any fantasy can fix anti-Semitism. Miryam fights to conquer the Staryk king. There is no magical cure for blind hatred.

Spinning Silver is pure gold. My only suggestion: make sure you read it someplace warm. The descriptions of northern European winter and the icy Staryk kingdom made me want to hunker under blankets the entire time. Hot chocolate, warm fires, thick blankets, and time to savor a magical fantasy.