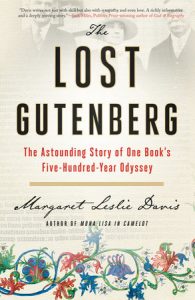 On October 14, 1950, an ordinary wooden box arrives at the southern California home of Estelle Doheny. Inside the box, wrapped almost carelessly by customs officials after inspection, is one of the rarest and most valuable books in the world: a Gutenberg Bible.

Doheny was one of the premier book collectors of her time, although she was barred admittance to the old-boys club of book collectors. Still, she had amassed a private collection that rivaled the rare book rooms of many elite universities and museums. Twice before she had bid on a Gutenberg Bible–and lost. She had even bid once before on this specific copy and lost. This time she was determined to have it. She thus became the only woman to have ever owned a copy of the Gutenberg Bible.

Margaret Leslie Davis traces the history of this copy through several owners, which included an Irish baron, the owner of Lea & Perrins, and Lord Amherst. This particular Bible was one of the last to remain in private ownership, finally bequeathed to a seminary library upon the death of Estelle Doheny (though that’s not the end of its story). The various owners each have their own stories, of fortunes won and lost, of collections gathered and scattered. Booksellers and brokers play their roles as well.

Davis is a very good writer, and the story is quite interesting. The characters could walk from her book into a novel and find a home. She includes historic and scientific data in measured doses, not too much and not too little. Her careful writing reveals some formidable research and reporting, though. For a book which has such historic significance, I was surprised at how little we know about Gutenberg himself and the process he invented. Apparently the historical record is incomplete because, as Davis notes, he never put himself into print.

The Bible that found its way into Estelle Doheny’s collection is now locked in a vault in Tokyo, but it continues to aid scholars. Her Bible was the first Gutenberg to be analyzed by a cyclotron, which discovered a previously unnoticed replacement page in the Bible and revealed information about the inks and paper Gutenberg used. That same Bible later became the first Gutenberg reproduced electronically, and can be seen in its entirety online at http://dcollections.lib.keio.ac.jp/en/gutenberg .

The Lost Gutenberg is a riveting account of a book, the people who had to own it, the history of printing and the history of book collecting. In Margaret Leslie Davis’s careful hands, it is also a wonderful read, informative and exciting.