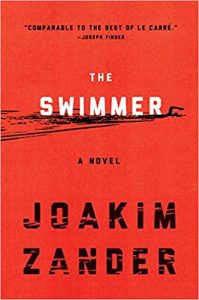 A young mother, killed in an explosion meant for her deep cover CIA lover. Their baby, left on the steps of the Swedish embassy. A man, tortured for decades by the decisions he made back then. That is the backdrop for Joakim Zander’s powerful thriller, The Swimmer.

The Swimmer is an unnamed operative who likes to swim. During a mission to Damascus in the mid 1980s, he falls in love and has a child with a Swedish woman. She is killed in a car bomb that was meant for him. Not certain how best to protect their child, he leaves the baby at the Swedish embassy with a note telling them how to place her with her grandparents in Sweden. Thinking he has covered his tracks, he returns to Washington and to his life as a spy. But he never forgets the child and tries to keep an eye out for her from a distance, hoping to protect her from his dangerous life.

Perhaps it’s genetics, but Klara manages to find her own danger. An ex-boyfriend gets drawn into an international conspiracy and asks for her help. When she agrees, she finds herself going across Europe, from Brussels to Paris to Amsterdam and finally home to Sweden, barely staying one step ahead of those who want her dead for reasons she doesn’t understand. Along the way she finds help from some unlikely sources: a lover who failed to mention to her that he was married, a stoner teenaged hacker, an old friend who runs moonshine, a college roommate who has become a lawyer, a corrupt lobbyist who is caught up in the same conspiracy against his will, and the father she never knew.

Zander’s book shifts from the first-person of the never-named swimmer to third-person narratives of other characters in the story. Somehow the author manages to make these shifts appear seamless, changing voices and perspectives smoothly and clearly. Zander also treats violence as an ugly reality. When people die in this book (and they do), it is not clean or neat or tidy. It is messy and terrifying and ugly and disturbing. One character has to vomit after committing an act of violence against another character. Guilt and sorrow and anger and panic follow the acts of violence. I love that a thriller author actually gets how an ordinary person would react to violence. Too often it seems that violence in thrillers is only told from the perspective of professionally violent people: soldiers or police or spies. But it is the very ordinariness of the characters that makes this book feel very real.

Zander is not an American, so don’t look for the typical American heroes here. This is not your Jack Ryan saves the world thriller. This is a darker view of American power, where there are good guys and bad guys and it is not always clear which are which or whether the good guys are actually all that good. But that’s probably a more realistic view of how the world actually works. We don’t live in an era with easy answers and clear distinctions, and it’s only fair that fiction follows life in that regard.

The Swimmer is a taut and fascinating thriller with well conceived characters and surprising twists. I look forward to reading more from this author.