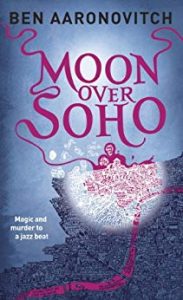 “It’s a sad fact of modern life that if you drive long enough, sooner or later you must leave London behind.”

This may now be my favorite opening line to any novel I’ve ever read, and I’ve never been to London! In Moon Over Soho, Ben Aaronovitch continues the story of police detective and apprentice magician Peter Grant, a mixed-race human able to see ghosts. Grant uses his abilities to solve crimes involving magic. Aaronovitch uses his abilities to write fun and engaging stories that mix police procedurals with urban fantasy. I am not sure whether Aaronovitch or his character Peter Grant is truly the more magical.

Grant is pursuing leads surrounding the death of a jazz musician. The musician’s death normally would be attributed to natural causes, but there is a strange magical echo, called vestigium, surrounding the body. Most humans cannot sense vestigium, but the coroner can and when he does, he calls Grant and Grant’s boss, DCI Nightingale. Nightingale is still recovering from injuries received during a previous investigation, so the bulk of the detecting will be up to Grant. Grant also enlists aid from DS Lesley May, another detective who was injured during that same case.

Grant is also called in to consult with the Murder Team on a case where a man’s…manhood was removed and the victim left to bleed out. They suspect that the man was the victim of some kind of magical creature, one that had teeth in her…womanhood. Grant is pursuing two lines of inquiry, and he cannot help but wonder whether there is a link between these two crimes despite the very different causes of death.

Aaronovitch puts a lot of humor into the books. Grant sometimes struggles to learn magic, and to Nightingale’s frustration he sometimes puts spells together in ways that are less than optimal. This sometimes results in things catching on fire. Grant also has garnered an unfortunate reputation for causing property damage, a reputation only made worse by a stolen ambulance careening down London streets in a (successful) effort to save the son of a demigod. Still, his skills, instinct, and talent are all needed to solve the crimes and expose the killers and their motives.

Moon Over Soho builds on the solid foundation of the first book and gives greater insight to Peter Grant and Lesley May. It is a fun ride through London’s jazz scene, and does a nice job introducing new characters and setting up a larger arc for future novels. An excellent follow up in a series I am thoroughly enjoying.