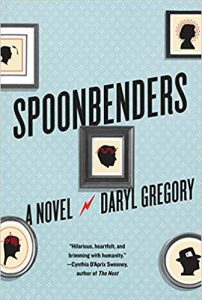 Spoonbenders is one of the most delightfully strange stories I have read in a long time. Spoonbenders tells the story of a very dysfunctional family: The Amazing Telemachus Family. Teddy Telemachus is a con man. The self-professed inventor of Johnny Carson’s “Carnac the Magnificent” routine, Teddy is a card shark and a grifter. Then he falls for Maureen McKinnon, a woman with actual psychic power. They marry and each of their three children has psychic power. Irene is a human lie detector. Frankie can move small objects with his mind. And Buddy can see the future. Together they create a stage act, but their act falls apart when they are unable to perform it on stage during the Mike Douglas show during the 1970s. Soon thereafter, Maureen dies from cancer, and the family’s lives are shattered.

Now, in the 1990s, they are struggling. Irene is a single mother who has just had to move back to live with her father. Her son, Matty, has just discovered that he has psychic powers of his own, but he is not sure what to do with them. Frankie is working a job that he hates, and is deeply in debt to the mob. Buddy seldom talks and mostly starts random remodeling projects in the house, projects that make no sense to anyone else. And Teddy’s card sharking days are long gone, ending when his hands were injured.

Daryl Gregory previously won the World Fantasy Award, and this novel was named a Best Book of 2017 by NPR. His writing is clever and crisp, with sharp dialog and distinctive voices for each of these well-crafted characters. Irene is cold and sharp. Teddy is expansive and brash. Frankie is all bluster and fluff. Matty is full of hormones and angst. And Buddy is confused and unsure. As the chapters shift between characters and between the 1970s and 1990s, this difference in the voices helps keep the narrative clear and propels the story forward.

Gregory does dash my hopes in the afterword when he declares that psychic powers do not actually exist. The fictional world he creates in this book is incredibly real. As a child of the 70s, I remember the Mike Douglas show. Gregory has a character inspired by The Amazing Randi, whom I also remember from that time. The parts set in the 90s include landline phones and period cars and tv shows and video game consoles and early computers and AOL complete with the whine of the modem handshake to connect. Since I don’t have psychic powers myself, I guess I would prefer that no one else have them to use on me (why they would waste time using them on me I couldn’t say, but hypothetically it could happen). Still, The Amazing Telemachus Family sounds absolutely fascinating.

What is remarkable, though, is how obvious it is that these powers have not helped them at all. Buddy can see the future, but it almost paralyzes him. He can barely function in the present because the lines between the present, past, and future are so fuzzy. It is hard for him to know whether he is acting in the present or remembering something he is going to do. Matt can astral project, but only when he is having some other kind of intense experience. Being fourteen and full of hormones, those intense experiences are…well, nothing that he can do in public. Irene knows when people are lying, which makes relationships a real challenge. Common conversation is full of “white lies.” “You look great in that dress,” “I’m doing fine,” “She’s running late.” Those sorts of social lubricants are things that keep peace among people, but they are the sorts of things that she sees right through.

So maybe it’s better after all that we don’t have psychic powers. Spoonbenders makes a compelling case that they are not necessarily helpful to those who have them, at least in living a normal life. Then again, normal might be overrated. Spoonbenders is definitely not a normal book. But it is a very good book.