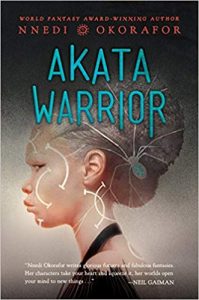 This sequel to Akata Witch has everything you want in a young adult fantasy. Compelling characters, exciting plot, brilliant writing, ferocious enemies, and a beautifully built world. Nnedi Okorafor is an amazing writer and Akata Warrior is a wonderful book.

Sunny Nwazue is a free agent Leopard person, or as we Lambs might call her, a witch. Along with her friends Orlu, Chichi, and Sasha, she is studying the ways of Leopard people with a teacher for their group and with a mentor for each of them individually. She is also a student and soccer player for her local school, where non-magic Lambs attend, blissfully unaware of the Leopard people in their midst.

Balancing the need for absolute secrecy about the Leopard world with her personal and family life has always been challenging for Sunny. When her brother is attacked and his life is threatened, that challenge becomes too great to bear. Using magic to help her brother is acceptable, but when she reveals herself as the source of the retribution she finds herself in trouble (again) with the Leopard council. Her punishment starts a process that leaves her vulnerable in new ways to attack from their greatest enemy, an ancient foe who is trying to return to the human world.

It’s hard to say what I like best about Nnedi Okorafor’s work. Her world building is imaginative, overlaying a magical world on top of modern day Nigeria with all its wealth and poverty. Her characters are distinct and different, each with separate voices and individual strengths and weaknesses. Sunny herself grows and changes throughout the book. Humorous scenes and one-liners pop up when needed to keep the tone from getting too dark. Sunny is a free agent, which means that although she has magic her family does not. This leads to natural conflict and secrets between herself and her parents and her brothers. These secrets are handled by the author logically–which is to say, there is yelling and crying and silence and avoidance of uncomfortable subjects. Probably the way most families would handle it, good and bad and angry and sad and resigned and loving.

Okorafor’s Africa is neither the “dark continent” of mystery and megafauna and backwards tribes living in grass huts that previous generations of writers presented, nor the poverty and disease ridden slums of late night charity infomercials. Sunny’s family lived in the U.S. but chose to raise their children in Nigeria, thinking they would be safer and healthier there. Her friend Sasha is from Chicago. His parents made a similar decision, sending him to live with Orlu’s family. Sunny and her family live in a nice house with a fenced yard. They use the same types of appliances they used in New York. They go to school, they play sports, they have cell phones and computers and Internet access, they live in many respects as well as or better than they did in the U.S. Okorafor’s Nigeria has its problems: crime and corruption and poor roads and oil spills are among the issues she mentions in the book. But Sunny’s family lives an essentially middle class life similar to the lives they led in the U.S. They just happen to be doing it in Nigeria.