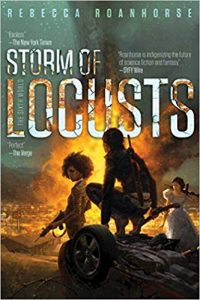 It is not often that I anticipate a new book as eagerly as I awaited Storm of Locusts, and Rebecca Roanhorse does not disappoint. In this sequel to Trail of Lightning, Maggie (known to some as a “Monsterslayer” and to others as a “Godslayer”) returns to face a new enemy. (Spoilers ahead.)

Gideon is a cult leader. Raised in a white family, he is actually Diné (Navajo) and has received clan powers. His powers allow him to control people…and to control locusts. When one of Gideon’s followers kills a friend of Maggie’s, she winds up caring for her friend’s niece Ben. They then learn that Gideon has taken Kai (a character from the first book) and Maggie and Ben pursue them to rescue Kai.

Of course, things get more complicated as Maggie, Ben, and Rissa (a frenemy of Maggie’s) encounter beings from the spirit realm of the Diné, are forced to leave the protected lands of the Dinetah to follow Kai and Gideon, are tricked, and captured, and escape, and find unlikely allies along the way. Alliances and friendships are made, questions arise about Kai’s participation with Gideon, and Maggie discovers new powers and new truths about herself.

If you don’t count locusts, the body count is lower in this sequel, and a lot more time is spent on Maggie’s personal journey and relationships with her team. The fact that she has a “team” is itself a growth aspect for Maggie, and it takes her awhile to recognize that. However, even though she usually tries to avoid killing people now, Maggie remains the same kickass heroine we met in Trail of Lightning. This is a deeper, more thoughtful Maggie, one who is developing new talents, new friends, and new reserves that she will undoubtedly need in the next book of this dynamic series.

It has been a busy year for Rebecca Roanhorse. Winner of the John Campbell award, as well as a Hugo and a Nebula, she is up for more awards this year and I suspect that Storm of Locusts will in turn gather its own shelf of nominations and awards next year. She is taking Science Fiction into new directions, representing a neglected voice in the genre, and I am eager to see what else comes from this amazing writer.