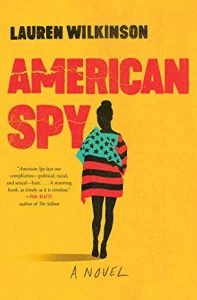 American Spy is one of the deepest, most profound books I have ever read dealing with race, gender, imperialism, and American identity. Lauren Wilkinson has managed to weigh in on numerous deep and profound topics while weaving a tale of spycraft that stands its ground against thrillers that follow more formulaic plots.

Marie Mitchell is a single mother raising twin boys. One night a stranger breaks into their suburban home. Marie kills the stranger, but we quickly discover that she has been anticipating this possibility for years. She takes her boys, flees to her mother’s home on the island of Martinique, and begins writing a journal which is the content of the novel.

We follow Marie’s relationship with her parents, her older sister Helene who died years earlier, Marie’s career in the FBI, and her recruitment and missions for the CIA. We find out who the boys’ father was, we meet Marie’s lifelong friend (and occasional boyfriend) Robbie, and her father’s friend Mr. Ali. And in the process we read about the rise of an early military contractor, the mixed feelings of African Americans when working for instruments of their oppression like the FBI, and the casual sexism and homophobia that permeated institutions in the 1980s (and clearly still does far too often still today).

I really liked this book, in part because it was challenging to read. Wilkinson does not shy away from tough topics and she is willing to delve into them in depth and with solid background. Sometimes this can sidetrack the story, but it is necessary and the author puts it to good use. I love the opportunity to look through different eyes at the world. Marie is African American, female, and definitely provides this white male reader with that different perspective.

I also love the open ending of the book. I don’t want to give away too many spoilers, so all I will say is that the book ends with the chance for the reader to decide what happens next–or, hopefully, the opportunity for the author to write a sequel letting us know what happens next in Marie’s life.

Marie is a challenging protagonist, fascinating and sometimes unlikeable. Principled, but willing to reinterpret those principles when new information becomes available. Courageous, bold, and yet willing to admit she is afraid, but unwilling to be stopped by her fear. Motivated by love, love for her sister, love for her boys, love for their father. Marie is someone you’d love to meet and fear to cross.

American Spy is unlike any other novel I have read. It is powerful, breaks with convention, tells a thrilling spy story but wraps within it powerful social commentary. Read it while wearing a crash helmet. You’ll be glad you did.