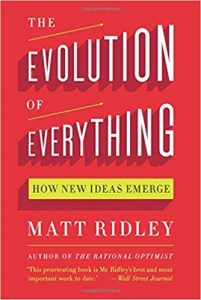 Nonfiction: The Evolution of Everything, Matt Ridley

When Matt Ridley titled his book The Evolution of Everything, he really wasn’t kidding. From the scientific to the social to the technological, Ridley examines how things develop from the bottom up rather than the top down. His arguments are compelling, his research is exhaustive, and his language is sharp. I cannot say he fully persuaded me in every particular, but his writing is worth reading and deserves serious consideration.

Evolution obviously refers to the Darwinian model of species origin and development, but as a word, “evolution” is much broader. Things “evolve” when they come to pass gradually, organically, without an external mechanism guiding and shaping the development. That is, of course, both the power and the controversy behind Darwin’s theory, that life arose and developed on this planet without divine origin or explanation. But many other things have also evolved in this broader definition, things that may not always first seem to have done so.

Language may be the best example. When students are taught a foreign language, emphasis is on learning “the rules” of the language and memorizing vocabulary. As I can attest from my own attempts to study other languages, this method has limitations. But that is neither how languages developed, nor is it how they are best learned. Toddlers learn languages naturally and almost intuitively. My granddaughters do not know nouns from verbs, they cannot give you the forms of “to be,” they are not ready for the NY Times crossword puzzles (I’ll get them there someday, I hope!). But they are learning English to communicate. They can tell us when they are hungry and thirsty and happy and sad and sick and silly. Their vocabularies are growing almost daily (they are ages 1 and 3 as I write this) and they love to have things read to them. This is an evolutionary process, and it is working with them as it works with toddlers around the world in their own languages. Someday they may sit in a classroom and stare at a book trying to sort der, die, und das. But the process will never be as natural as the one they are involved with right now.

I am not as libertarian as Ridley is, so some of his statements ran counter to my own deeply held beliefs. His thoughts on government run health systems were interesting to me as an American. I am not certain all of his fellow countrymen are as skeptical of the UHS as he is, and I am absolutely certain that most Americans are not as enamored with our own system as he seems to be. I will certainly grant, though, that we have no consensus on what we should do differently, but there are not a lot of Americans whom I know that would argue our decentralized system works well for the poor. Similarly his statements on education seem to give much more credence to private education working for all than what seems likely, although he does cite many examples. But those philosophical differences do not change my admiration for his intellect or his research. I am simply not convinced that there is no place for government in assuring that the poorest among us get access to health care, education, and other benefits of society.

I also do not think his lumping global warming/climate change in with religious belief is warranted. I get the point he was making, that there can be a kind of messianic fervor among those who are concerned by the changes we are making to the earth, but when 97% of those who have studied the subject directly are in broad agreement with the science and its conclusions, then the counter views of those who are not climate scientists should be met with skepticism. In his chapter on the origins of life, Ridley mocks those who are not biologists, paleontologists, etc. who question the evolution of life, yet in his chapter on religion(?) he lends support to those who are not climate scientists who question the views of climate science. That seems inconsistent to me.

I will freely admit, though, that I am a blogger, not a scientist. And Ridley’s arguments throughout the book are researched, compelling, well written, and thoughtful. I thoroughly recommend the book, not because I agree with everything in it, but because it made me think and to reevaluate my own opinions. I never want to just hold an opinion because that’s what I’ve always believed, or that’s what the last person I read thought about something. Ridley does not let thoughts go unexamined. If you want a book that makes you think, The Evolution of Everything is a great place to start.