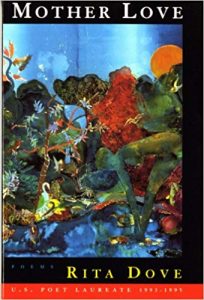 Rita Dove served as US Poet Laureate in the 1990s. Her collection of sonnets, Mother Love, was written at the end of her tenure in that post. It is a powerful collection inspired by the myth of Persephone. Dove’s speaker sometimes is Persephone, sometimes her mother Demeter, and sometimes a much more modern woman addressing the roles of mother, daughter, wife/girlfriend/other that women often fulfill during their lives.

In Greek mythology, Persephone was the daughter of Demeter, goddess of the harvest and seasons. Hades, god of the underworld, fell in love with Persephone and captured her to be his wife. Demeter was so stricken by the loss she made the earth barren and cold until the other gods prevailed on Hades to allow Persephone to return to the surface. He allowed her return, but warned that she could not eat or drink anything from the underworld or that would require her to return. Persephone did eat three pomegranate seeds despite herself–or maybe intentionally–and so every year she had to spend three months with Hades underground. Thus, we experience those three months of Demeter’s grief as winter, ending when Persephone returns in the spring, and so on.

Sonnets are fourteen lined poems. Dove makes the choice to limit herself to sonnets, because it “chains” her to a format. Since Persephone, and in her own way Demeter, are chained, since women are also often chained to their roles and expectations, Dove felt the format itself would be a poem within the poems, chaining the form as further expression of the content. The poems do not limit themselves to the ancient myth, but rather express the relationships which comprise the myth: mother, daughter, wife, mother-in-law, girlfriend, etc. They express the pain of letting go, of watching a daughter grow up and make her own choices, of not interfering even when those choices diverge from your own. They express the pain of growing up, of making difficult choices, of living with the consequences of those choices, of finding out that love and sex and independence and adulthood are not everything we thought they might be. Women (and men) face these challenges, but it is fair to say that society places burdens on women that men often escape, and Dove’s poems look unflinchingly at those expectations and what it takes to meet them, or what it takes to defy them.

Mother Love was written, the author says, “for her mother and to her daughter.” It is a challenging and arresting work, powerfully unified throughout and offering deep insight on the pains and joys of being a mother, a daughter, and everything else we ask women to be.