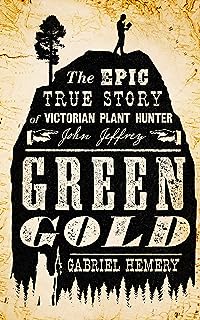 Green Gold is a creative epistolary novel telling the story of plant hunter John Jeffrey’s expedition to North America in 1850 through the words of his journal, letters, and other documents. Representing an elite group of subscribers, Jeffrey’s mission was to collect seeds from North America which could be planted on estates in England and Scotland. Starting off with great promise, early letters and journal entries told of his remarkable journey across the north Atlantic and then across Canada, and a package did arrive with a small number of viable seeds and other natural items he collected for his sponsors. But before the end of his planned journey, Jeffrey disappeared. Did he abandon his quest in favor of gold or love or some other attraction in the new world? Or did he meet with foul play? His sponsors never learned, and, well, you’ll have to read the novel to find out for yourself!

Author Hemery has subtitled the book, “The Epic True Story of Plant Hunter John Jeffrey,” although it is based on a journal that does not exist and is compiled by a researcher who is herself a character with emails and notes detailing her work. Still, the research that went into this novel is impressive. Not only is it replete with scientific names, descriptions of plants and their locations and appearance in the wild (and how that varies with elevation and latitude), it has detailed descriptions of actual 1850s towns in Canada and the U.S., and is consistently written in the style of prose used in the Victorian Era. Much of the book reads like a Dickens or Austen novel, even though it was just published. John Jeffrey was an actual plant hunter, sent out in 1850 by the Oregon Botanical Society (an English/Scottish group) who disappeared at some point during the trip. So although this is a work of fiction, there are a lot of facts woven into the story.

I am grateful to the author and publisher and to Anne Cater for an ARC of this book in exchange for my review, and I am happy to be part of the blog tour promoting this book. Check out the other reviews of the book, and obviously read the book yourself!

Green Gold is not going to appeal to everyone. Epistolary novels can be challenging reads, and one done consistently in a nineteenth century voice is going to be even more of a challenge for many readers. The historical and scientific detail will appeal to some readers–and will not appeal to others. That said, Hemery clearly put a lot of work into this book and the labor of love shows in its attention to detail, its consistency of voice, and its creative use of the information. Many readers will appreciate that effort and I can see this becoming a favorite book for the right person.