Book Review: The Leaf and the Cloud, Mary Oliver 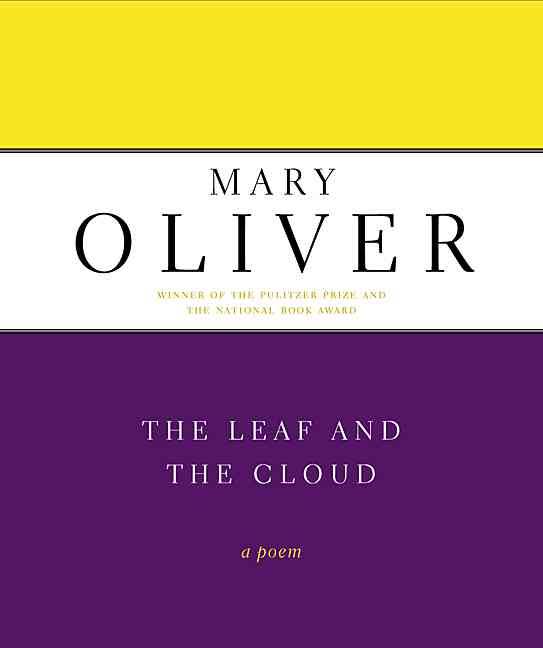 Poetry: The Leaf and the Cloud, Mary Oliver

Mary Oliver passed away January 17, 2019. Winner of both the National Book Award and the Pulitzer Prize, her poetry both appealed to a wide audience and sometimes frustrated critics who favor poems that could perhaps be considered less accessible. Oliver’s work uses basic and universal themes: nature, life, death, eternity, God. Her book-length poem The Leaf and the Cloud is an excellent example of how her work is both easy to apprehend and appreciate while at the same time taking the reader deeper into thought and feeling.

The title comes from a John Ruskin quote: “Between the earth and man arose the leaf. Between the heaven and man came the cloud.” What follows is seven chapters of a single poem, each chapter itself broken up into smaller pieces, all working around this theme that nature both illuminates and obscures eternity. Whatever your idea of God (if you have one at all), a god that created both nature and humanity is going to be revealed through those creations–and is going to be hidden by those same creations. One can see glimpses, one can discern concepts and ideas, but no one can see the totality of the creator through the creation. I was reminded of various biblical passages as I read this poem: “The heavens declare the glory of God,” “Now, we see through a glass darkly.” Oliver does not quote from the Bible, but her work definitely gives an air of familiarity with many of the Psalms. That may be an actual echo, or it may just be from dealing with similar concepts. Either way, for this lapsed churchman, it was full of nostalgia and longing.

Oliver is not preachy, nor does she assume everyone believes as she does. What she does is share her faith in nature, in life, in eternity (unnamed), and in the universe. Whether you choose to walk with her is up to you as the reader. She is going to go outside, to connect with the leaves and the clouds and the beetles and the hills and the rest of nature. You should come with her, though. You will see things in new ways, hear nature speak, experience life in its many expressions, and find a different perspective within yourself.

The Leaf and the Cloud is romantic, especially in the sense of poets from previous times, but it does not lose its footing in the modern technological era. Instead, it reminds us that regardless of the march of time, we are creatures, part of nature, evolved to live within the universe with other creatures. We remind ourselves of this to our benefit and we forget it at our peril. Mary Oliver’s voice may be silent in death, but her poetry continues to speak as eloquently as ever.

carts me off to the bottomlands

the long work of rising —

Death, whoever and whatever you are, tallest king of

tall kinds, grant me these wishes: unstring my bones;

let me not be one thing but all things, and wondrously

scattered; shake me free from my name….

Book Review: The Leaf and the Cloud, Mary Oliver

2 thoughts on “Book Review: The Leaf and the Cloud, Mary Oliver”