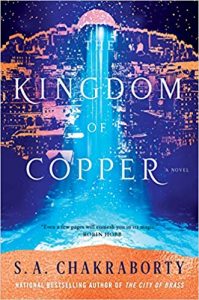 S.A. Chakraborty’s debut novel, The City of Brass, was one of the most highly honored fantasy novels of 2017. Her 2019 sequel, The Kingdom of Copper, continues the epic story of the healer Nahri, the djinn Dara, and the prince Ali.

Set five years after the events of the first novel, Nahri is enduring her forced marriage to Ali’s brother and continuing to learn the healing arts. Her magical abilities are growing, allowing her to heal more complex problems, but her political acumen still is lacking when it comes to dealing with challenges in the court. Still, she is the Banu Nahida, a title which not only reflects her healing ability but also carries religious and political leadership within her tribe. This makes her both a potential ally and a potential threat to the king.

Ali escaped assassination and is living quietly in an oasis in the desert with the people who rescued him. He has recovered from his physical injuries but is coming to terms with new powers he did not have before: the ability to find water and the ability to breathe underwater. This connection to water is extremely helpful to the desert tribe that saved him, but would be very challenging to the city where his father rules. He has reconciled himself to never returning home. Others, though, have made different plans for him.

And Dara. Dara was killed by Ali during their final battle in the first book. But djinn can be hard to kill permanently–after all, Dara had killed Ali first during that battle and Ali refused to stay dead. Dara is brought back to life to serve the Banu Nahida…but not Nahri. There is another Banu Nahida with a claim in Daevebad, and this one is no potential ally to the king.

Chakraborty’s novels are rich and deep and sweeping. She creates a beautifully layered Arabian world, one where the human world and the world of the djinn occasionally intersect but are typically separated, almost like an overlay on a map. Her characters are schemers and dreamers and scholars and warriors. Religion is both crucial and ignored, with some characters motivated by zealotry while others acknowledge divinity only for public show.

Although the books are set in the Islamic world of about 120 years ago, they are set in the djinn version of it with little (in this book virtually no) contact between the two. Only descendants of the magical tribes can enter this world. Some of these are partially human, but no fully human person can see or enter the world. This gives the author great freedom to imagine a world that is more like the world of Aladdin than the world of European colonialism. She uses that imaginative license fully, giving us extraordinary palaces built on the abject poverty and misery of slums. Poor and oppressed people living in squalor often face harsh punishments for the decisions of the rich, even decisions that are meant to help those poor and oppressed people. Powerful people enjoy the status quo and are committed to maintaining it at any cost.

Chakraborty is giving fantasy readers a rich and epic series. Although it is described as a trilogy, I would be sorry to see it end with the next book. I am developing one of those strange relationships with this series: I am excited for the next book to come out, but I am dreading it because it is supposed to be the last one of the series. Still, I am a richer person for having walked through the streets of Daevebad for however long the series lasts.

Also see by the same author: Book Review: The City of Brass, S. A. Chakraborty