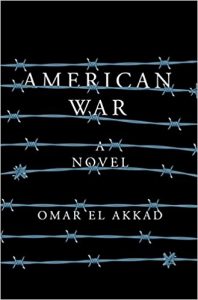 When a prize-winning journalist turns his skills toward writing a war novel, the result is likely to make multiple lists of “best books of the year.” American War has done just that in 2018. Omar El Akkad was born in Egypt, grew up in Qatar, and then moved to Canada. He worked as a journalist, covering news about terrorism, Guantanamo Bay, the Arab Spring, and the Black Lives Movement among many others. This experience shows in his novel.

Late in the 21st century, climate change has ravaged the southern US. The country has fractured. The south is in rebellion, large portions of the southwest and west have been reclaimed by Mexico, and South Carolina has been quarantined to prevent the spread of a man-made virus. In this stew of violent weather and more violent humanity, one family tries to survive.

The Chestnuts live in a repurposed shipping container along a river in Louisiana. Benjamin and Martina have three children. In 2075 when the book starts, older brother Simon and twins Dana and Sara T.–who prefers to bind the name and initial together in a single word, “Sarat”–are living at home with their parents when their father learns of an opportunity to move the family to the north. North, away from the war, away from the ravages of climate change, a place where his children can go to school and grow up and have a better life. Tragically, a suicide bomber attacks the office where he is applying for the job, and he is killed.

Martina tries initially to stay in their home, but as the war and rumors of attack get closer to them, she finally decides to flee with her children to a refugee camp. Her hope that this will be a temporary situation and that her family will soon move on, either to the north or to Atlanta, the capital city of the south, or to the Mexican-controlled areas of Texas, fade as the family is stuck in the camp for years. During that time, Sarat falls under the tutelage of an older man, a recruiter, someone who finds vulnerable persons and turns them into weapons for the South. Some of his recruits wear suicide vests and die performing their one act of patriotism/terrorism. He has much bigger plans for Sarat, though.

American War is about the destruction of a country, largely through self-inflicted wounds. The plague which isolated South Carolina was a genetically engineered virus. The climate change was caused by overuse of fossil fuels. The second war between the states started because one group of states refused to stop using fossil fuels when the federal government demanded they stop. It is also about the destruction of a family, mostly from wounds inflicted by a damaged country. Sarat becomes a killer, but not until death is brought to her own door. Simon, Dana, Martina, all suffer profoundly because of the climate and the war. Even the book’s narrator, who is not revealed until near the end, is a victim of these forces even though much of the book’s narrative takes place before the narrator is born.

El Akkad’s story is far too familiar to anyone who has followed news around the world. The refugee camp he describes, set in Mississippi, sounds like camps that have been in the news for decades in places like Lebanon and Syria and Ethiopia and many other places. The recruiting of vulnerable and hopeless people in those camps is not a secret. The cruel irony, of course, is that the recruitment preys on hopelessness, telling people they will never get out, while racist politicians use that same recruitment as a reason to bar entry of refugees into their countries, thereby assuring that they will never get out. The casual cruelty of people toward each other, the manipulation of story to sway opinion, these are things that we see constantly. The power in El Akkad’s work is seeing these things set in the US, seeing foreign spies and provocateurs operating within our shores, reading about people who look like us and talk like us becoming no different in our desperation than those in other countries in their desperation.

American War is a powerful, beautiful, tragic, deeply moving novel. Hopefully it is one of speculative fiction, and not one of prescient insight. Given some of the divisions within the US and the possible consequences of increasing global warming, it’s hard at this time to be sure.