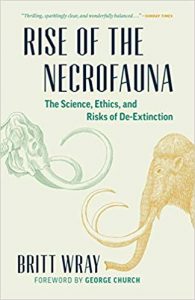 Science: Rise of the Necrofauna: The Science, Ethics, and Risks of De-Extinction, Britt Wray

Several months prior to starting Scintilla.Info, I encountered a brilliant book exploring the possibilities of restoring extinct species. When my wife proposed and began Scintilla, I immediately knew that I wanted to share this book with other readers. It has taken me a few months to get back to it, but having reread Rise of the Necrofauna I am impressed again at the depth and insight Britt Wray brings to the subject.

There may be two immediate reactions to the thought of restoring extinct species. The first one is, “We’ve seen this movie five times now, and it always ends badly.” Jurassic Park and its sequels is the stuff of science fiction and does not reflect the actual scientific progress undergirding the possibility of restoring more recently extinct species, but the cautionary lessons in the movies may give some people pause at the entire idea. The other immediate reaction is, “Cool! I want my own pet wooly mammoth!” Which opens up the entire question of ethics and responsibility to the process.

Wray’s book is quite thorough. She examines the science, and indeed the technology is getting closer to creating something that is potentially like de-extinction. Wray makes the point repeatedly that regardless of the name we may give it, we can never simply recreate extinct species. The wooly mammoth is a good example of this. Partial DNA has been recovered from frozen carcasses found in the arctic. That DNA has been degraded and corrupted, though, so any replicated DNA would necessarily require augmentation and hybridization with existing animals, most likely Indian elephants. Passenger pigeon DNA could be similarly recreated using living pigeons. But in both cases scientists are not restoring the extinct species. They are (potentially) creating new species that are very similar to the old species but not identical.

The other aspect to this is that a species is more than simply its DNA. Elephants are highly intelligent, with culture and behaviors passed from mother to child. Would an elephant mother reject a mammoth calf? Could a sub-tropical elephant teach a mammoth calf the behaviors needed to survive in the forests of Canada or Siberia? If not, who would?

Numerous ethical, legal, and logistical questions would accompany any restoration. Laws differ from country to country; an animal protected as endangered in one country might be considered an illegal GMO creation in a neighboring country. What happens if that animal crosses the border? Animals shape their environment. Once they go extinct, the ecosystem adapts to the new reality. Can the new environment support the old organism? When people are involved, other questions arise. If wooly mammoths were reintroduced, for example, who would pay when they knocked over a fence? Or a truck?

Wray seems to have a generally skeptical view of the likelihood of de-extinction. She has serious reservations about the wisdom and morality of the effort. But she also has some very positive suggestions on ways that the technologies can be used to help save animals that are on the brink of extinction, possibly by adding diversity to small populations using DNA from preserved samples of stored carcasses, or by adding disease resistant genes to vulnerable populations. And she allows that in an age of anthropogenic mass extinction, a strong case can be made that humans have a moral obligation to try to undo some of the harm we have done.

Rise of the Necrofauna is not the impending arrival of Jurassic Park. Britt Wray makes it clear that there are significant limitations to what science can do, and maybe what it should do. But it might not be all bad to see thylacines roaming Tasmania again, or possibly a return of great auks to the North Atlantic.