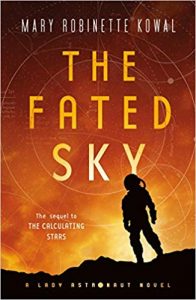 In this sequel to The Calculating Stars, Mary Robinette Kowal continues the story of Elma York, the “Lady Astronaut.” The Fated Sky tells how York came to be assigned to the first mission to Mars. As she did in the first book, Kowal gives us a moving and beautiful story that is full of humanity, grace, and rock solid science. It’s a geekfest with a heart. Anyone who reads these stories and is not blown away by the scientific detail or is not moved by the heart and soul of the characters really needs to check their pulse to make sure it’s still there.

Elma York has become the face of the space program. Perhaps the time is right, though, for her and Nathaniel to start a family. It is the 1960s, though, Having a baby would mean the loss of her job, would mean she would be confined to Earth and no longer able to live on the moon for several months every year. She would have to give up space.

When her flight home from the moon misses its landing site and instead lands several states away, the passengers are held hostage by a group of “Earth Firsters,” people who deny that the climate is changing and want the money spent on colonizing space to instead be used to help those still affected by the meteorite impact. Elma uses her fame and name recognition to help save her fellow passengers. This in turn prompts the space agency to name her to the first Mars mission.

The Mars mission will take three years. That timetable likely means she will never be a mother. Also, the Mars team has already been preparing for over a year. Putting her on the team means bumping someone else off the team, in this case, her friend Helen. Helen was one of the few non-white members of the team, and the only Asian member. The political realities of the early 1960s, though, meant that for funding to continue the program needed its most famous participant as the face of the team–and Asians were specifically NOT needed to be the face of the team. In fact, another one of the team members was specifically selected in part for reasons of funding–a South African supporter of the apartheid regime. This becomes problematic several times during the mission, as his distaste for the other non-white members of the team creates tension among the crew.

Apart from the racial tensions that challenge the crew, other interpersonal tensions arise. Kowal nicely weaves those tensions into the story, showing how they would be an expected and even natural part of a multi-year mission when the only other people you encountered were those on board your ship. Multiple external challenges also confront the mission. Two of the fourteen crew members died during the trip. Illness sweeps through one of the ships. One of the two ships was damaged, forcing the entire team to spend two weeks crammed onto the same ship while the other was repaired. Nathaniel York is hospitalized on earth, and another crewman’s wife dies while they are in transit. A terrorist attack hits far too close to home. These conflicts and perils, both in space and on Earth, make the journey feel real.

Space travel is the stuff of adventures and romance. It is also deadly serious and is done by people who love and fight and screw up and somehow keep on going in the face of every danger and crisis. We are fools to think putting flesh into tin cans strapped to the top of bombs is going to magically work without a cost in lives and loves. Kowal brings these human costs front and center, showing us both how hard and how important the journey will be.

Again, Kowal treats all of her characters with love and sensitivity. Elma York is not perfect. But she is good. In these days of fallen heroes, finding a heroine who is good in the midst of an excellent story is a treasure.