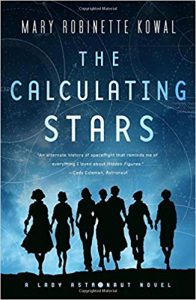 Shortly after reading this novel, I tweeted, “I am in love with the main character and the author. Luckily my wife is the understanding type.” The Calculating Stars is an achingly beautiful story, one that sometimes moved me to tears, sometimes made me laugh out loud, and one that constantly reminded me why I fell in love with science fiction so many years ago. Mary Robinette Kowal has created a character, Elma York, who is smart, courageous, human, flawed, noble, and relatable. The only reason I was willing to put The Calculating Stars down when it ended is that I already had the sequel in my hands.

Elma and Nathaniel York are enjoying a few days in the Poconos in 1952, enjoying the beauty of nature and the fresh air and…OK, let’s be grownups here. They are a young married couple, and they are having lots of sex. And that is more or less the tone that Kowal sets throughout the novel. It is told in the first person. This is Elma’s story. And she is as enjoyable a character as you will find in any novel. She is fresh, funny, sexy (but never crude or vulgar), sometimes foolish but never intentionally cruel, and brilliant. While they are there, the unthinkable happens. A meteorite hits, wiping out much of the US east coast–including their home in Washington, D.C. Elma’s parents also lived in Washington. They are forced to flee the effects of the meteorite in a frantic journey that sends them to Wright-Patterson Air Force Base near Dayton, OH, where what is left of the US government and military tries to come back together.

Elma is a physics and math genius, but it is 1952 and she is also a woman. Nathaniel had worked for the nascent space program, but the men who led the government were not looking for advice from a female. Fortunately, Nathaniel had no such qualms. Giving Elma the raw data available from the meteor, she calculates the planetary effects of the strike. For a few years, the Earth would cool down. Ash and dust ejected into the atmosphere would block sunlight and lower global temperatures significantly.

That was the good news.

The bad news was that the meteorite landed in water. After the ash and dust settled, the water vapor would trap heat and raise the surface temperature of the planet. Catastrophically. After enduring less than a decade of frigid temperatures the planet would return to normal. Then it would keep heating up. Within a century it would become essentially uninhabitable.

Using Elma’s numbers, the decision is made to jumpstart the space program with a goal of colonizing the moon and Mars. Astronauts are selected, training begins, and the goal of colonizing the solar system moves forward. Except…none of the astronauts are women. Or people of color. Women are involved behind the scenes. “Computers,” in the sense of calculating machines that crunch numbers, guide ships, and perform all the duties we take for granted today, did not exist in the 1950s. However, mathematically gifted women did exist, and just as they played a role in the real space program that developed during the 1960s, Kowal has them acting as the “computers” for her fictionalized space program of the alternate history 1950s. Elma takes a job as a computer, and from there launches an ambitious program of her own: becoming a lady astronaut.

I simply cannot emphasize enough how good The Calculating Stars is. With a deft touch, Kowal lays bare the racism and sexism that was the norm for the era. Although Elma quite naturally reacts to her accomplishments and abilities being dismissed because she is a woman, she can sometimes be completely oblivious to those same biases affecting her African American friends. When she becomes aware of the racist barriers to them, she occasionally shifts into “white savior” mode, failing to appreciate that her own interventions can be almost as belittling in their own way. She always means well, and her motives do matter, but her actions sometimes undermine her own ideals.

Elma also struggles with anxiety and is prescribed medication for it. Even today, mental illness is stigmatized and dismissed. Having some experience myself with anxiety and the absolute terror I felt before being officially diagnosed and taking medicine for it, I read those passages with a powerful sense of identification. Having a protagonist who shares some of the challenges I have faced is an amazing feeling. Seeing her wrestle with it in the highly judgmental 1950s made me appreciate both how far we’ve come and how far we still have to go.

The Jewishness of Elma York is also wonderfully handled. Some time after they arrive in Dayton, Elma recognizes her need to deal with the loss of her family. She visits a synagogue to speak with a rabbi. When Nathaniel comes home, she is sitting shiva. Elma has torn a ribbon and is wearing it as an outward sign of the broken heart within.

That was the first scene in The Calculating Stars where I cried. It was not the last.

The Calculating Stars is a triumphant book. It is moving and heartfelt and wonderful. I cannot recommend it enough. It is a terrific scifi/alternate history novel. More than that, Kowal gives us a powerful story of an extraordinary woman. Books just don’t get much better than this.