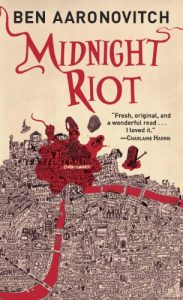 Sometimes we get asked, “How do you pick the books to read/review?” A lot of times it is from other readers and reviewers. Often it is books nominated for different awards. If we like one book by an author, we will seek out others by that same writer. A couple have been from requests by the author herself, or meeting the author at an event. We try to have a strong local angle: local authors and authors coming to local events deserve as much of our support as we can provide. Sometimes, though, it’s as simple as our son coming up to us, shoving a book into our hands, and saying, “You will like this. Read it!” This is how we encountered the gem Midnight Riot by Ben Aaronovitch. If you like urban fantasy with a strong dose of humor and sarcasm, especially with a British touch, then I would love to do the same thing to you: take the book, shove it into your hands, and say, “read this!”

Midnight Riot has been described as Harry Potter grows up and joins the fuzz. Not quite sure that captures the book, but it’s not bad. Peter Grant is a beat cop ready to move forward with his career. His hopes for something exciting are dashed, though, when he is assigned to the most boring, dead end position available to cops. Basically, it’s where cops are put so they can’t mess things up for themselves or other cops. Before he starts this new beat, though, he interviews a witness to a strange murder.

The witness is a ghost.

Not many people can see ghosts, let alone interview them. Not many of those people are cops. This brings him to the attention of Detective Chief Inspector Thomas Nightingale, who is in charge of a very small unit within the Metropolitan Police Department (better known to Americans as “Scotland Yard”). Actually, the unit has only one human in it, until Nightingale reroutes Grant’s career and makes it a two human department. Nightingale’s department is charged with making sure the paranormal keep the queen’s peace. Sometimes that means brokering a peace deal between the king and queen of the Thames and their offspring. Sometimes that means taking violent action with permanent effect against a pair of vampires who have taken up residence in a house. And sometimes it means chasing down a revenant–a ghost–who has started a new afterlife career as a serial killer.

Peter Grant is a delightful protagonist. He is mixed race, with a scientific mind but easily distracted, eager to find the intersection between science and the supernatural. He is an eager apprentice to Nightingale, learning magic and the paranormal denizens of London as he works to solve the mystery behind the one-spirit crime wave haunting his city.

Aaronovitch shows us a gritty and dark London that lives parallel to the city experienced by most people. It is a London with vampires and water spirits, evil ghosts and a dedicated few humans who can see the larger world hidden behind the facade of normalcy. From Midnight Riot he has gone on to write several more (and continues to add to the adventures of Peter Grant). I am looking forward to reading those ongoing adventures–assuming my son allows me to borrow the books once he is done with them.