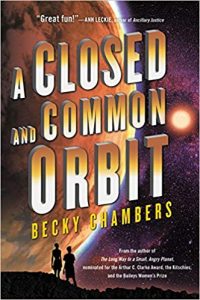 Most people do not get to choose their own names. Gamers and artists and writers may opt for names of their own, but they are generally the exceptions. It’s fun to think, though, that a name might mean more if it reflects who we’ve become or who we want to be instead of a parent’s hopes or dreams or ambitions or tastes. “Sidra” means “of the stars” or “like the stars.” The chosen name of an AI illegally ported into a human-appearing body, she is one of the few people who chooses her own name. In Becky Chambers’ book A Closed and Common Orbit we get to share with her the joys and terrors of choosing and discovering who she actually is following this transition.

A Closed and Common Orbit is set in the same universe as The Long Way to a Small, Angry Planet. In that earlier book we first meet Pepper, a human tech genius who lives with her artist boyfriend, Blue. Pepper gets called to work on the Wayfarer after it is damaged at the end of the first book. The crew realizes that their sentient AI, Lovey, has been damaged beyond repair. The only hope of saving her is to do essentially a factory reset. If it succeeds, they will restore Lovey. If it fails, everything that defined Lovey as a uniquely sentient person will be gone, replaced by someone or something different.

It fails, and the sentience known from the factory settings as “Lovelace” inhabits the Wayfarer.

“Lovey” was an integral part of the crew. More than that, the human technician Jenks had fallen in love with her, and had purchased a human simalcrum for her to inhabit so they could be together. Learning Lovey is dead almost destroys Jenks, and dealing with “Lovelace” (who has Lovey’s voice) is almost more than he can bear. Rather than simply replace Lovelace with another AI, Pepper offers her the option to inhabit the body Jenks had purchased for Lovey and leave the ship to live on a planet. Lovelace, seeing the effect her presence has on Jenks and the rest of the Wayfarer’s crew, agrees.

Living in a body, though, is very different than living in a ship. Instead of cameras positioned in the corners of ceilings to see everything in a room, you have eyes. Only two of them. Positioned awkwardly in the front of the head, leaving unobserved space above and below and behind. The body does not need food or sleep or air and can withstand submersion and frigid temperatures, but since she needs to pass as human she has to behave as humans do.

More than that, her body is not her own. That is, she is an alien, and interloper, possessing a body she was not designed to wear, that was purchased for another, that is illegal to own on any planet. Sidra chose her own name, but discovering she has agency and can make her own choices is constantly challenging.

Orbit also gives us the backstory of Pepper. Pepper was originally named Jane 23. She was one of many Janes, just another manufactured girl designed to clean scrap for recycling or reselling. She is a genetweaked human, not a machine, but she grew up on a planet with multiple other Janes being raised and trained by non-sentient android “mothers” to do busy work until she died. Escaping her factory after an accident opens a space to the outside world, Jane stumbles into a scrapped shuttle with a sentient AI, “Owl,” who helps her survive and guides her through adolescence. She, too, struggled to learn how to be human, and she never forgot the love and kindness shown to her by the mind and conscience of the ship.

For both Sidra and Jane/Pepper, the process to discovering who and what she is takes many twists and turns. Learning limitations. Making friends. Making mistakes. Deciding. Discovering. Accepting herself. Accepting others. Being human is not easy for humans. When you are a genetically engineered slave or a factory made AI, the process is more complicated. What Becky Chambers shows us in this warm and beautifully written book, the process may be painful and messy but the results can be absolutely joyous. Being a person is a dangerous journey, one that is best taken with friends. I might argue that it should also be taken with delightful books like this one.