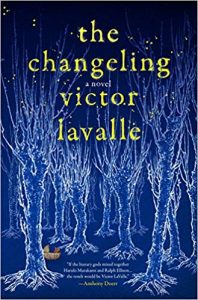 Apollo West grew up in New York City wondering why his father had left him and his mother. He vowed that he would be the kind of father who would never leave his child alone. When he met Emma, it seemed perfect. Apollo was a rare book dealer, Emma was a librarian. They fell in love, and baby Brian came along. Everything seemed to be perfect…until Emma started getting texts that erased themselves. Pictures of Brian, taken from some stranger’s camera. Apollo began to worry: his amazing wife seemed to be losing her mind. Soon, she began claiming that the baby in their house was not actually Brian but was someone–something–else. And then one night, everything changed. The Changeling is a beautiful book that sucks you in and grabs hold of you with both hands.

Victor LaValle creates two amazing characters in Apollo and Emma. Apollo is a devoted father and husband, committed to his baby and his wife. Despite not having a male role model, he tries very hard to be the kind of father that his son would look up to and to be the kind of husband that his wife deserves. Emma is a bibliophile, committed to libraries because her childhood librarian was committed to her. She loves children, especially her baby, and she loves her husband. But when she starts seeing things that no one else can see, it marks the beginning of the end. She cannot love this thing that has replaced her baby. Or has it? Apollo just sees their baby, Brian. Has Emma gone crazy, or is she the only one who is sane?

The Changeling starts firmly in the real world. Set in New York City, other than the title and the location on the “Best Fantasy Novel of the Year” lists, there is nothing in the early part of the book to indicate it is anything other than a story of a family falling apart. As the book progresses, though, we see that the “normal” part of New York City is a patina disguising a much darker fantastic reality. Apollo begins to realize that nothing is quite what it seems. Witches and darker beings share the city with regular people, and the tragedy that destroyed his family is not unique. It is not even particularly unusual.

LaValle’s characters confront a number of challenges, and not all of them are of the supernatural kind. Apollo West is a young black man in a field dominated by older white men. Racism is a daily reality in his life. Later in the book he is confronted by police for walking through a white neighborhood. They were called because he did not look like he belonged there. Apollo and Emma are not poor, but money is a constant struggle. Apollo’s best friend suffers from PTSD after military service. Apollo wrestles with nightmares about his missing father and tries hard, maybe too hard, to live up to his ideal standard of fatherhood. Some of the greatest challenges faced by the characters in The Changeling come from living regular lives in New York City and not just from supernatural forces that they cannot control.