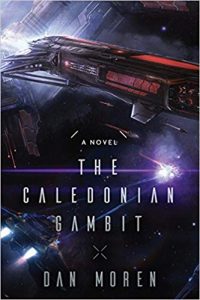 The Imperium was spreading inexorably through the galaxy. Earth was among the many systems under the thumb of Illyricum. Now, an unbeatable invasion force headed for Sabea. Eli Brody, one small part of that invasion force, was among the first through the interstellar gate in the vanguard of the attack. What he quickly found out is that he was also among the last. In an act of desperation, the Sabeans destroyed the gate, shutting their planet off from the rest of the galaxy, but also destroying the entire invasion fleet. Thousands of dead, trapped in the nothingness that was “between” areas of real space.

Five years later, a new gate opens and an agent of the Commonwealth visits Sabean space, their first visitor from the larger galaxy. He has one mission: get Eli Brody and take him back to Eli’s home planet of Caledonia. The Commonwealth is at war with the Imperium, and the Imperium is building a weapon on Caledonia that threatens to change the shape of that war. The information that the Commonwealth has received about the weapon has come from one source: Eamon Brody, Eli’s brother. And that source is missing.

The Caledonian Gambit is a lot of things, but most of all it is just fun. It careens through the dark alleys of an Irish-inspired planet. It has spies and secret networks and terrorists/freedom fighters. It has family tensions and a pretty girl who can knock you out with her fists. It is spy thriller and space opera and snarky humor all rolled up into one neat package. Dan Moren is a fan of science fiction, and his love for the genre shows in the pages of this delightful novel.

Science fiction is a very versatile genre. It has plenty of room for social commentary: economic disparity and racial inequality and social engineering. It let’s us explore scenarios of nuclear holocaust and climate catastrophe and computer meltdowns and global pandemics. It gives us hope in a future that is welcoming for LGBTQ and POC and the differently abled and the non-neural typical. And it leaves room for romps through space that just want to play with heroes and bad guys and secret agents and leave the deeper questions to others.

And I’ll admit it: as much as I love the works that shine a light on our present by exploring a potential future, sometimes it’s fun to just see heroes do heroic stuff and chase the secret weapon and fight the bad guys and let the music swell at appropriate times and let the credits run at the end. (Literally, there’s a long list of people at the end of the book that the author thanks.)

This may not be one of those books that makes me reflect on our world as it is. This is not a book that changed me or moved me or challenged me. Frankly, I read a lot of those books, and sometimes I don’t mind taking a break. This is a book that I had fun reading. I smiled, I cheered, and I hope that Dan Moren has some further adventures to come for his team from The Caledonian Gambit.