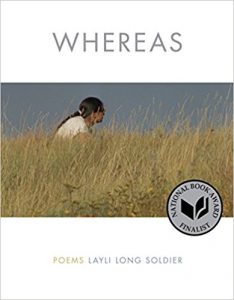 Whereas some words typically only appear in official government proclamations.

Whereas the US Government issued an official apology to the Native American peoples.

Whereas this happened quietly in 2010, without fanfare or participation by any tribal leaders.

Whereas this apology carries no weight of law or expectation for corrective action, and

Whereas Layli Long Soldier is a poet from the Oglala Lakota Nation,

Whereas she is exquisitely positioned and capable to reflect on language and its effects,

Whereas is an extraordinary work by a gifted artist.

Finalist for the National Book Award and winner of the National Book Critics Circle Award for poetry, Whereas is the debut collection of poems by Layli Long Soldier. The poems cover a range of themes: motherhood, language and meaning, relationships, nature, and especially Native Americans’ relationship to the United States. Those seemingly disparate themes have more connective tissue than is immediately apparent. Just as European descendants forced out the original inhabitants through means that included genocide, their language, English, forced its way into the lives of the survivors, killing native languages and corrupting meanings. For example, “apology” is a word with no direct translation into most tribal languages. Expressions of regret without making something right or undoing a wrong are simply not part of many cultures. Long Soldier compares it to the removal of a tooth–a procedure necessitated in the narrator’s life (presumably the author) by the failure of the US government to uphold funding for tribal health services. Regardless of how much one may regret the loss, the tooth will never be restored.

Long Soldier includes elements of American history that don’t always appear in historical biopics or even traditional history classes. Her poem “38” remembers the 38 Dakota men executed by order of Abraham Lincoln for the Sioux uprising. This was the largest “legal” execution in US history. Their execution came during the same week Lincoln signed the Emancipation Proclamation. Their execution was on the day after Christmas, December 26, 1862.

Starvation motivated the Sioux uprising. After confiscating Sioux land in what is now called Minnesota, the government assigned them a miniscule stretch of land to support their population. They were not allowed to hunt this land, or beyond, and they were not given any other financial means for support. Rather than starve, the they fought. They lost. Another 1000 Sioux were jailed, and their remaining strip of land taken. The survivors were exiled to reservations in what is now South Dakota and Nebraska. One of the white men killed by the Sioux during the uprising had mocked the starving people by suggesting they eat grass. His body was found with his mouth stuffed full of grass, an act Long Soldier describes as a poem.

Long Soldier dances with words. She questions the definition of “opaque,” suggesting that the word itself should mean the opposite of what it actually means. She physically divides her poems, one comprising a single line with the words rearranged as you follow the outline of a square. Others are divided by straight lines, or are two poems interwoven so reading the left column gives one poem, reading the right column gives a second, and reading the lines sequentially adds another layer. Some poems are taken from other passages that have words ellided. Others have words divided between lines, one letter followed by part of the word, concluding on a third line by the remainder of the word. The visual supports and upholds the lyrical, adding a different dimension to the art of the word.

Whereas is not a book for the faint of heart. It challenges and confronts, using history and heritage to forcefully speak out. Wrongs cannot be undone, but they deserve to be acknowledged and understood. Layli Long Soldier speaks for those who no longer can, and she does so with passion, eloquence, beauty, and fire.